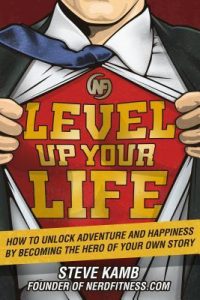 I am totally into “Level Up Your Life” by Steve Kamb right now. Here’s the premise: a former gamer dissected the psychology of what makes video games so addictive (the dopamine hit from gaining points and new skills, defeating the big boss at the end of each level and progressing to the next level) and thought, why can’t you apply that same strategy to real life?

My favorite part are his references to the Hero’s Journey (Joseph Campbell). As I outlined in my journey of writing the Piercing the Veil trilogy, when I first started analyzing all my favorite stories and found that they all contained a similar story arc, I thought I’d made a brand new discovery. Then I found that Joseph Campbell figured this out back in the 1930s. (I was about 80 years too late. Bummer.) Still, I had a burning conviction that the reason these stories endure, the reason we love them so much, is because we all identify with them. We all know that’s supposed to be our story, too.

Steve Kamb uses this concept of the Hero’s Journey, and combines it with gaming psychology to create an incredibly creative approach to goal-setting. Example: on levelupyourlife.com, you can create your own alter-ego, complete with class (are you a warrior? A scout? An assassin? A ranger? A monk? etc), a slogan, and your personal origin story (“so-and-so was just an ordinary guy, who struggled with the character flaws of whatever, but he had a secret…”). From there, you create your own epic quests, broken down by category. You then break each quest into smaller activities, assigning a certain number of points to each activity—whatever you think it should be worth, between 1-100 points. Every 100 points, you get to “level up.”

I’d love to hear from you! Who’s your superhero alter-ego? What’s your slogan? What fictional characters would you most love to emulate?