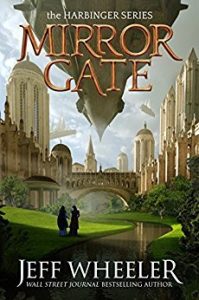 Love this series! I’m so in awe of how intricate Wheeler’s worlds are.

Following the pattern in the “Kingfountain” series, the Harbinger series also follows the characters over epochs of years. In this one, the main characters Cettie and Sera, are young adults. They study at Muirwood, looping in another of Wheeler’s series, and they are on the brink of war with Kingfountain: all of his worlds are interconnected, which is a fun little easter egg for his longtime readers. One of the major conflicts in this story is that Sera, who is the granddaughter of the emperor, finds that her grandfather dies, leaving her and her father as the possible options for the council to choose as the next emperor or empress. Since her lineage is disputed by her father and he now hates her, this turns into political intrigue. Through manipulation, Sera finds herself not only on the short end of the stick, but also the subject of widespread defamation. But it’s only the second book in a five-part series; I can’t wait to see the evil characters get what they deserve.

Cettie, meanwhile, is studying at Muirwood along with Sera, and while she is one of the most talented students the abbey has ever seen, her heritage from the Fells makes her fellow schoolmates scorn her. Even though Fitzroy has been trying for years to adopt her, he cannot legally do so without the consent of her parents, and her parentage is in doubt. Because of this, her future is uncertain. She also loves another ward of Fitzroy’s, but can never say so, because her almost-sister Anna, whom she loves, has been openly enamored with him for years.

This story does end on a bit of a cliffhanger, but since the series is complete, I just went straight into the next book and barely missed a beat.

Violence: none to speak of (fantasy only)