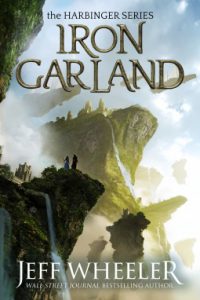 Ah! This one was so satisfying, I almost wish it was the last in the series (even though it didn’t all get wrapped up yet).

The stories of Sera and Cettie continue, though this story follows more quickly on the heels of the previous one–they are still young women, about the same age as in the last book. Sera is no longer in the running as empress, and her father has been named. She may have the chance of being “rehabilitated” after her fall from grace and reinstated into the line of succession after her father–but he is courting the powerful and newly widowed Lady Corinne. Sera realizes that if he has another heir, he will not want her in the picture complicating matters. So he tries to send her to Kingfountain to form an alliance with their prince. I love how the Prince of Kingfountain comes into the story, though: it’s the BEST. I was immediately rooting for the two of them, which was surprising since this is exactly what Sera’s evil father wants.

Meanwhile, Cettie continues to grow in her powers. It turns out that she is the Harbinger, or the one who gets visions of the future which she passes along to her almost-father Fitzroy, the head of the Ministry of Wind. When she reveals this to her family, her visions help to guide her family through trials as they cling to the promise that things are not always what they seem. She also meets a very rude young man named Rand from a nearby manor who has a traumatic backstory, and I pegged him as a romantic interest for Cettie as soon as he came on the scene and groaned inwardly. One thing about Wheeler’s stories: you can’t always bank on a happily ever after the way you expect it to turn out. More often than not he throws curve balls. I really wanted Cettie to end up with Adam Creigh, despite the love triangle with her almost-sister Anna. As Rand grew increasingly sympathetic, I started to resign myself… and though I want to avoid spoilers, I’ll just say I did not see coming what happened next. But it was fantastic.

Also, as I read this book, I was reminded on multiple occasions of “Bleak House” by Charles Dickens. Sure enough, the afterword confirmed that Wheeler intended this to be a loose retelling! I felt very special. 🙂