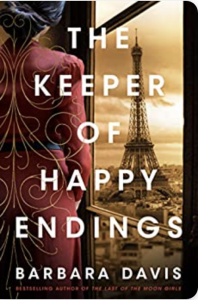 Sigh. This is one of those feel-good, curl up with a good mug of tea or hot chocolate on a cold and rainy day kinds of books. I didn’t know it would be that for awhile though… I was cringing at times, fearing that I was in for a tragedy, or a bittersweet story at best. But Barbara Davis didn’t let me down.

It’s a popular style to tell WWII tales by bouncing back and forth between two characters a couple generations apart, and then to bring them together in unexpected ways. (The story could have been a Rhys Bowen novel in that way.) The story follows Soline from the 1940s, Rory from the 1980s, and then the two of them together in the 1980s as well. Soline was a Parisian dressmaker during WWII, who found herself as a volunteer at a hospital. There, she met Anson, the American love of her life, who was also a volunteer. War and tragedy conspired to sweep them apart, and Soline has lived the rest of her life alone. After suffering several more tragedies upon coming to America, Soline picked up the pieces of her life and made a name for herself as a Parisian seamstress, known for her bridal gowns which guarantee the bride a happy ending. (This is the only overt fantasy element of the story: Soline’s mother’s line passes down the gift of weaving a charm into the dress.) But alas, her bridal shop burned to the ground, and damaged Soline’s hands so that she could no longer work. By the time Rory encounters her, she’s a recluse.

Rory’s life, two generations later, parallels Soline’s story. Like Soline, she has a difficult relationship with her own mother, Camilla. She also fell in love with a heroic doctor who went missing on a mission in a third world country, and hasn’t been heard from since. Her fiancee, Hux, encouraged her to drop out of college and pursue her passion: her own art, and opening a gallery. Rory comes across Soline’s old bridal shop, burned but not ruined, which has remained empty ever since. She decides to rent the space, and finds a box of old letters from grateful brides. She’s determined to return them to Soline, which is how the two meet. They click instantly, both sensing that they are kindred spirits, and that they share even more than a strangely common past. The two women grow close, while Camilla discovers and envies Soline’s connection with the daughter from whom she is nearly estranged. But it turns out that all three women are connected in a way that would seem almost roll-your-eyes coincidental, if not for that tiny bit of magic introduced into the story by the dress charm. If that’s possible, then why not fate, or serendipity, or whatever else you might want to call it?

The last few chapters of the story were heavy with cheese, too-perfect happy endings, and on-the-nose dialogue in which each character says the sorts of direct things nobody would actually come right out and say. But I enjoyed them anyway, especially because I really didn’t expect things to turn out so well. (Modern stories generally don’t; it’s like there’s an unspoken rule against them or something.) The book certainly lived up to its name, though!

Language: I can’t recall any