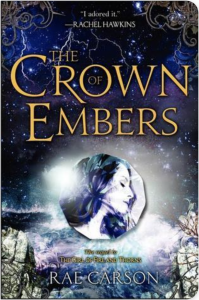 This is one of those rare books where the sequel is better than the first!

I almost didn’t decide to read on in this trilogy, because my favorite character in “The Girl of Fire and Thorns” died about 75% of the way through. I didn’t know if I cared enough about the rest of the characters surrounding Elisa to continue. But, I loved Carson’s writing style, and I thought her world complex and interesting enough that I decided to give it a chance. I’m so glad I did.

Elisa started the trilogy as a princess turned queen consort; but when her husband the king died, he named her his sole heir to the throne, and she became queen in her own right. She also “inherited” the head of the king’s royal guard, Hector. Hector was kind to Elisa when she first arrived at the palace as an overweight and backward queen consort, but I somehow was under the impression that he was much older than she was in the first book. As soon as Carson went out of her way to say how young Hector was in this one, that he wasn’t that much older than Elisa was, and by the way he was very handsome too, it was clear that he was about to become the new love interest. It was done *so well* though! The tension between them is just right, and lasts exactly as long as it needs to, with reveals on both sides in precisely the right ways and the right moments. (The only thing I’d have changed was Elisa’s bumbling awkwardness: she manages to shatter what might have been terribly romantic moments by shoving her foot right down her throat. I think it’s meant to be endearing, but it’s more like cringe-inducing. Hector, on the other hand, is just perfect.)

Meanwhile, the villainous and powerful race of the Inviernos continues to threaten Brisadulce, and someone apparently wants Elisa dead. Multiple attempts on her life both serve to advance the politics of the realm, and Elisa’s and Hector’s budding relationship. She is advised to find a husband for political reasons–a predictable trope, given the tension with the head of her royal guard. Eventually she uses this circumstance as a ruse for her to venture out on her own, in search of her destiny as the bearer of the Godstone, as written in their scriptures. Once again, shades of what I assume are the author’s religious background seem to color the text. Some scripture fragments I actually recognize from the Bible are cobbled together with archaic language that sounds like something that might appear in a different ancient religious book. Carson also explores how abused the concept of “God’s will” can be by those who make it mean whatever they want it to mean, adding a layer of fascinating richness to the story.

And the ending–ah! So perfect! I immediately had to rush on to the third and final book in the trilogy.

Sexual content: nothing direct… I thought it was going there, and sure looked like it was going to, but it didn’t. There is a lot of discussion of premarital sex with intent, though.