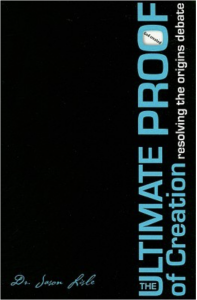 I discovered Dr Lisle in a YouTube video in which he expounded on the concept of the Mandelbrot set, and connected it and other fractals to actual forms in nature, concluding that God thinks in mathematical terms. I’d actually researched the concept of fractal images appearing in nature myself about a year earlier (though not Mandelbrot specifically) and had been preoccupied with what it could mean, though I never really came to a conclusion other than “fingerprints of God.” Dr Lisle’s explanation was much more satisfying and conclusive, I felt. Ever since then I’ve been watching his videos and reading his books. This is the first of his books I’ve finished, and I picked it up because he said in one of his videos that if you get only one, it should be this one (and the title certainly implies the same.)

Lisle makes the very good point that a creationist and an evolutionist can each look at the same scientific facts and draw a different conclusion, because each begins with a vastly different worldview. Thus, their interpretation of evidence necessarily must differ… and because of that, you’ll (probably) never convince anyone to change their minds with evidence alone. That was certainly my experience back when I used to engage in apologetics debates! Instead, he argues, you must address the worldview itself. I’m with him on this, but I believe it’s likely quite problematic, as it took him an entire book to get across the concept that, for instance, the very existence of the laws of logic, math, scientific method, reliability of our senses, morality, and any other abstract concept necessitates the existence of God (as such concepts can’t possibly exist in a world that is purely materialistic. Where did they come from, if not from a superior mind that imbued all intelligent life as well as the universe itself with such concepts? Why else would we, or the world around us, obey any laws at all?) I’ve wondered all of this without really wondering about it in so many words, I guess, because to ask the question seemed to me like the toddler who continually asks, “But why?” ad nauseum. At some point you have to just accept certain things as true and move on. And yet, the toddler has struck on something inherent about the nature of reality… adults have just grown out of the habit of asking the question. We’ve gotten used to it. Indeed, Lisle says that most evolutionists will respond by begging the question, with, “that’s just how things are.” But, of course, as any toddler knows, that’s not really an answer.

Where he loses me is with the argument that only a young earth creationist actually has reason for his presuppositions as listed above. I can see (and I think CS Lewis made a similar point in “Mere Christianity,” though limited to morality alone) that the existence of abstract concepts necessitates a God. He argues that these presuppositions necessitate not only the Christian God, because there are scriptures upon which a Christian can base these concepts which God has revealed to us (specifically, those that state that God’s nature never changes, that He upholds all things with His most powerful word, and many others). One can suppose that another holy book might make similar claims and thus also serve as a reasonable pretext for them as well, but Lisle claims that none do, and I’ll have to take his word for that because I don’t study comparative religions enough to say. He further claims that only a young earth Christian has a logical foundation for his presuppositions, because Genesis is quite clear that the earth was made in six days, and if we take Genesis as allegorical, what else in scripture must we throw out? I do see this too, honestly–I agree that we can’t pick and choose what we like in scripture, and if we do, we’re left with a shaky foundation indeed. I do believe it’s quite possible to be a sincere believer who loves God and who likewise believes in an old earth, the Big Bang, and evolution as a means of creation–but he’s not arguing that it’s not possible for these two things to coexist in a given individual, only that they are logically inconsistent. So I guess I do agree, now that I write this out.

My favorite part of the book was definitely the segment where he goes into logical fallacies and formal logic. I never got to take a course on that in school and wish I had. I see that he has a book on this, designed to be a course. I took copious notes on this one, but I may well pick that one up. Man, I wish I could watch this guy debate someone…