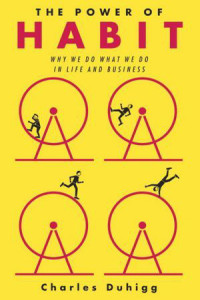 The Power of Habit

I’m  listening to this on audiobook right now by Charles Duhigg, and it’s fascinating. What is it that motivates people to change?

In a nutshell, there are three components to a habit: the cue, the behavior itself, and the reward.

It’s not possible to erase a habit any more than it’s possible to un-learn something you know (thoughts create a physical structure in our brains, after all)… but you can greatly weaken a habit (or strengthen it) based on the frequency of repetition of the behavior. And if you want to change a habit, since you can’t erase it, instead you have two choices:

An example of the first: say you’re a drinker. When the clock hits a certain time, it triggers a craving for a whiskey (or whatever), and then you proceed to drink for the rest of the evening. The reward you get from this is a sense of relaxation and stress relief.

Sadly, according to the authors of the book, you can’t change the fact that 5 o’clock will trigger this desire. What you can do is substitute a different behavior for that cue, though: like, say, a kombucha instead of a whiskey (provided you like kombucha). Or a club soda with cranberry juice. If the goal is relaxation, you might try kava kava tea.

This might work for a little while… until some kind of stressor hits. Then most people tend to “fall off the wagon,” going back to their old habits. The people who do not do this are the ones who have something bigger than the new routine to fall back on: some kind of reason for changing the habit in the first place. (Using the same example above, studies show that this is the reason why Alcoholics Anonymous has such a high success rate: they invoke God, or a “Higher Power” who motivates change and gives the participants hope that change is possible.)

This hope, or motivation, is where the second way to change a habit comes in: “One habit to rule them all.”

The powerful example in the prologue of the book was a woman who was newly divorced and depressed, overweight, addicted to cigarettes and with a host of bad habits. She made up her mind that she wanted to hike across an Egyptian Desert, and she realized that in order to do it, she had to get in shape. So she started an exercise program. This one habit (with a strong motive) slowly began to change all her other habits: she started to eat better, she kicked the cigarettes, she went back to school and got a better job, she bought a house, and she got engaged. (I think. I can’t remember all the details but it was something like that.) Little by little, that one decision affected every other habit she possessed. The goal, combined with the exercise, provided the power of displacement.

Another example is that of Michael Phelps, the 9-time Olympic Gold Medalist in swimming. When his coach scouted him out at seven years old, he had the raw materials, but the coach knew he needed something else to make him stand out. The kingpin habit that Phelps’s coach encouraged him to cultivate from a young age was that of visualization, every night before he went to bed. He encouraged Phelps to envision every step of his practice: swimming the lengths of the pool, the sensation of the water on his skin, the feel of snapping off his latex cap at the end. This routine allowed all the other physical routines to fall into place. One of his visualizations even included overcoming obstacles, including swimming in total darkness. So when Phelps actually did lose the seal on his goggles during the Olympics and could see nothing at all, instead of panicking, he set a new world record.

What I take away from this: you can transmute a habit, but in order to make it stick you have to have a good motivation for change. It seems that motive needs to be emotional in some way… and generally it takes the form of faith and hope.