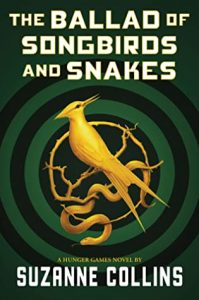 I know better than to read villain origin stories, and yet… it was from the world of the Hunger Games. How could I resist?

Beautifully written, and horrifying in the same way that the original trilogy were, this prequel follows Coriolanus Snow before he becomes the President who is Katniss Everdeen’s nemesis. You like him; you really like him at first. That’s inevitable (nobody will continue reading if they can’t root for the protagonist), but you also know you’re set up for a fall from the very beginning. You want her to somehow rewrite history and make him turn out good after all, but… no. Of course he won’t.

Amazingly, he retains his integrity for about 3/4 of the story, though. The little decisions he makes that lead him down the slippery slope into evil are so cleverly done, so minor at first that you can almost justify them, if you hold an opportunistic view of morality rather than an absolute standard. But we are the choices we repeatedly make, and each poor choice makes the next one that much easier. The final denouement happens quicker than I think it should have, though–he had too far to fall in too short a period of time, I guess. Still, at that point since I knew it was coming, I preferred to just “rip the bandaid off” and have done with it.

Violence: Of course (it’s the Hunger Games, after all)