Ten years ago I lived in Oaxaca, Mexico for a summer. At the time, I thought I wanted to be a missionary doctor in Latin America, but I didn’t know Spanish yet. So I volunteered with a company called Manos de Vida, lived with a family that didn’t speak English, worked with a doctor and a nurse and a team that didn’t speak English, and went into the mountains in the surrounding areas where we still needed a translators from either Mexteca or Zapoteca to Spanish, in order to make ourselves understood by the natives. Three months later I came home fluent in Spanish… although I use the term “fluency” loosely (in this case it means I was able to carry on a conversation—although not necessarily with a great deal of eloquence.)

A decade later: I am a doctor, but a naturopathic one (here’s the description of what that is, if you care), and I have my own practice in Tucson, AZ (I won’t give you the link to that because if I did then you’d know my real name! Hint: it’s not C.A. Gray). I did use my Spanish on and off in medical school, when we had rotations either in Mexico or in certain parts of AZ where that was the dominant language. But at the moment, I’m seriously rusty and my grammar is appalling.

All that to say: right now I’m in Puerto Rico with my family for vacation. My brother and sister-in-law arrived before my mom and I did, and before we got there, my brother told me he had a hard time ordering lunch in Spanish. (I think he said he’d mastered the words “taco” and “baño.”) He told my sister-in-law he was glad that once I got there, I’d be able to help.

Uh, yeah, not so much. When we were driving around, I saw a fast food restaurant sign that read, “Servi carro,” and at first I translated in confusion, “We feed your face?” Then I realized that must mean they have a drive-thru. Then when we went hiking in the El Yunque rainforest for the Baño Grande and Baño del Oro, my first thought was, “Bathroom of Gold?” 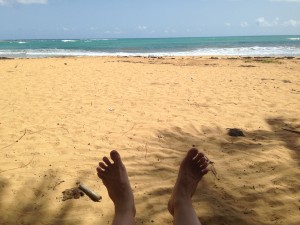 So I bought a few National Geographic magazines in Spanish, and did what I used to do when I was learning the language the first time (except this time at the beach, of course): I highlighted the words I did not recognize and looked them up. A decade ago I did this with an actual Spanish/English dictionary, but now I do it with a slick app on my iPhone. (Side note: super sad how my iPhone has become an extra appendage.) By the time I finished, I felt pretty proud of myself, and I had also learned a little bit about agriculture and the world domination of the tomato. (Yes.)

But alas, when I get back to Tucson, will I still have reason to continue studying, given the paucity of opportunities to actually use the language? I’ve made attempts a few times throughout the years to get together with Spanish-speaking friends and insist that we are not allowed to speak English for a few hours at a time, and it always degenerates into charades, laughter, and eventually, English. (Once I had a roommate who spoke French but not Spanish, while I spoke Spanish but not French, and we tried to make a rule that each of us would speak to the other only in our respective foreign languages while at home. That lasted approximately an hour.)

There are just too many things to learn, and not enough time to do it!