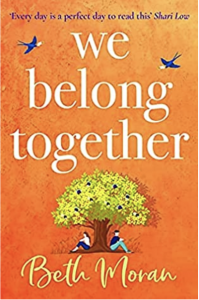 I found a new favorite author! This is the second book I’ve read by Beth Moran (the first was Christmas Every Day) and they were both just delightful. I’m not generally a chick lit kind of a girl, but they were chick lit in all the best ways and without the drawbacks (which usually tends to be an insecure, over-the-top quirky main character, sappy romance, overt sexual content, and a predictable plot.) Moran’s books do still follow a bit of a formula so far, but they don’t check those boxes for sure. The main character is likable but down on her luck. She’s forced for one reason or another to relocate to a romantic off-the-grid hideaway, where she meets the boy-next-door type of guy. She falls for him, of course, but there’s a clear complication that, for a time, means they can’t be together. Meanwhile, she is embraced by lovable townspeople, finds herself in a new endeavor, and also supports her new friends as they achieve their dreams.

The specifics of this one were a surprise though, and while I knew in the big picture where it was going, I definitely didn’t know the details. Eleanor Sharpley was an internet influencer under the pseudonym Nora Sharp, as a food critic–except she was kinda sorta pressured into becoming super nasty in her reviews by her publisher. The meaner she was, the more her fame grew. But then, someone she hurt, either directly or indirectly, decided to get even. They turned into a stalker, and Eleanor felt so threatened that she ran. She had to go somewhere completely off the grid, where they couldn’t find her, and so she thought to run to her best friend Charlie’s house. But Charlie was always flighty, so they haven’t actually spoken in a year. On the way, Eleanor’s car broke down, and a passing stranger with a baby in the car rescued her. Eleanor discovers that said stranger, Daniel, happens to live at her destination–only Charlie isn’t there. She died, and Eleanor didn’t even know.

Daniel turns out to be Charlie’s brother, not her ex, and he adopted her baby. The charming house has fabulous potential, but it’s a wreck because Daniel is now a single parent and working all the time. One thing leads to another, and Eleanor becomes his new roommate and his daughter’s nanny. She also takes on what they later discover was Charlie’s dream of making over the place as a bed and breakfast retreat. Meanwhile, there’s a feud going on with the townspeople on different sides of “the river,” hearkening back to events from 100 years earlier. Eleanor, determined to become a better person than Nora was, and to do something good in the world, attempts to mend the rift. The romance with Daniel is a slow burn, because Eleanor is afraid to tell him who she really is. She’s afraid he won’t be able to see past it. Also, her stalker hasn’t given up. As the threats get closer to her new home, Eleanor is forced to choose between maintaining her anonymity and protecting the people she’s come to love.

The story still has a happily-ever-after, though it’s done in a believable way. I love all of the supporting characters, too, and the conflict resolution in the town adds another feel-good layer to the tale. Will definitely be reading more by Beth Moran!

Language: very little if any, I can’t totally recall

Violence: none though there’s some almost violence