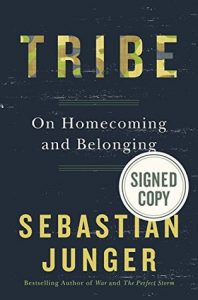 I’m having a hard time figuring out how to rate this book.

The concept behind it boils down to the idea that humans are happier when we’re forced (though hardship, usually) to band together and look after the needs of one another, rather than just our own. Examples include how early white settlers who were abducted and joined Native American tribes didn’t want to come back; how in the wake of Hurricane Katrina, survivors banded together to share their resources; and how the same occurred during the Blitz in WWII Britain. Consequently, mental health conditions (at least in the latter example, and after 9-11 as well) actually improved across the board, suicides decreased, and people generally counted themselves happier than they had been before tragedy struck. The point the author made wasn’t necessarily that it was the tragedy that made people rate their overall happiness levels higher, but the community.

I agree, of course–community and a sense of belonging is one of the fundamental building blocks for health which I can identify in my clinical practice, and the lack of it does tend to drive pathology in some cases (mental or otherwise). But I think the examples given, particularly given their intensity, misses something else fundamental: a sense of purpose, which Abraham Maslow considers the pinnacle of his “hierarchy of needs.” In a world where all our needs are generally provided for (well, used to be anyway–who knows where we’re currently headed), and where opportunities and options for how to spend our time are endless, I think many people struggle with a sense of aimlessness. In a crisis, opportunities shrink dramatically. Survival becomes paramount: both one’s own, and that of one’s fellow men. Suddenly the people in those situations found that someone else needed them, when perhaps they’d never had that feeling before. One of the fastest ways to forget about one’s own problems is to focus on helping someone else. Community is a byproduct of this: it’s natural to bond with those who serve us, and whom we serve. That’s kind of what a good church should be.

(Side note: I had family in New Orleans during Hurricane Katrina, who would dispute the author’s commentary on the social dynamic there at the time. I can’t comment on the other examples he gives, though.)

Violence: none that I can recall