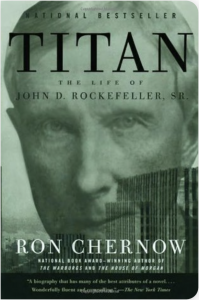 Chernow is quickly becoming one of my favorite historians! While I realize that nearly every author probably can’t help but include some element of “spin,” the depth and detail of his research helped to convince me that he was as intellectually honest as he could possibly be with the evidence available.

I went in to this biography with a preconceived notion of John D Rockefeller, Sr; I thought he was a greedy scoundrel who was more or less responsible for the state of modern medicine as we know it: specifically, “sick care” which involves treating symptoms with drugs that suppress and cause a myriad of other problems, rather than trying to get to the root cause and heal the patient. I believed, based on what I had heard, that he was not content with the billions he had made in Standard Oil and the railroads, and that the Flexnor Report of 1910 was his attempt to squash all competition and achieve a complete monopoly in medicine, too.

As I listened to the story of his very difficult upbringing, with a bigomist charlatan father who abandoned his mother and the family, I felt sorry for John. I admired his hard work and determination to pull himself up by his bootstraps and make something of himself despite his background, and his bent toward philanthropy even from an early age, when he had very little to give away. He was an extremely devout Baptist, with vision and conviction that God would prosper him not for his own sake, but so that he could be a blessing to the world. Of course his strict Baptist views had their down sides–he was a bit of a Pharisee, not only in his own life but in how he raised his family too–but Chernow convinced me that he was genuine.

As Chernow chronicled Rockefeller’s rise in the business world, the creation of Standard Oil, etc, I kept waiting for the turning point, when Rockefeller would turn “to the dark side.” I was confused when it just didn’t come. He was cutthroat, surely, and he did drive competitors out of business and form a decided monopoly–even though he did what he could to make it look like he hadn’t. He’d purposely allow a few little minor competitors to survive so that when accused of monopoly, he could point to them like a fig leaf and claim, “no I haven’t, see?” But, so far as I could tell, nothing he did was truly illegal. And meanwhile, he was always personally extremely generous. His terrible reputation seems to have stemmed almost entirely from a journalist with a personal vendetta against him because she blamed him for her father’s death, due to the father’s working conditions. Ida Tarbell published a series of exposes in a newspaper that captured the entire world’s attention, in a serial style like one of Charles Dickens’ novels. During that time, Rockefeller became one of the most hated men in the world. Some of what Tarbell wrote about him was true, but some were misleading “spin” and outright lies. I found myself sympathizing with Rockefeller and his family as the stress of this took its toll on their health.

Still, I waited to hear how Rockefeller became the founder of the monopoly of allopathic medicine, particularly since it was mentioned on several occasions that when he faced his own health challenges, he was partial to osteopathy, homeopathy, herbal medicine, and natural cures. It wasn’t until he was well into retirement that he ventured into the medical arena, and he did so as a philanthropist, not as a business venture. He also did not do so personally; his charitable giving had long become such a monumental undertaking that he hired Frederick T. Gates (no relation to Bill; I checked) to distribute his wealth and decide where the money should go. The focus on medicine was Gates’ idea. Gates, too, was the one who had a bone to pick with homeopathy; Rockefeller himself always preferred it and found himself overruled by his various boards when his own ventures helped to crush the chiropractic, osteopathic, and homeopathic colleges around the world. At the same time, I can almost see why that happened, and there was some justification for it. There was no standardization of medical learning, and many of the schools had very substandard education and little to no entrance requirements. The idea of requiring a certain standard seemed a good one. I suppose, like anything else, the question then becomes–who decides what those standards are? And what’s their incentive to do so? A good idea can easily be corrupted when men’s own self-interests get involved.

Ultimately, Chernow succeeded in changing my perspective on Rockefeller. I don’t see him as a villain anymore. I think he was a flawed man, of course, but he had many admirable qualities and he overcame a great deal of hardship both in his youth and later, when his wealth made it seem as though everyone wanted his pocketbook rather than himself. The way Chernow tells it, Rockefeller managed his extreme wealth and all the pitfalls that come with it better than most would have done, in a similar position.