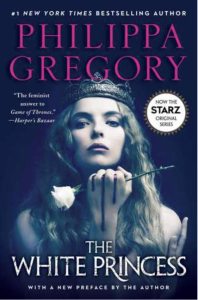 This is a very difficult book to rate… on one hand, the story was compelling, very well written, and it made me think. On the other hand, I hated the actual story, and I regret reading it, honestly. It did a great job of stirring up a sense of helpless rage, though I don’t consider that to be a good thing. I almost stopped a little less than halfway through, and I kept going only because I paused and read the synopsis of Elizabeth of York’s life on Wikipedia, to make sure that things would get better. Thus reassured, on I read… but either Wikipedia was wrong, Philippa Gregory took a great deal of narrative license, or else Wikipedia just didn’t bother to mention the main points of Elizabeth’s story that upset me because it didn’t consider them relevant.

Elizabeth was the last in the line of the York dynasty, but there were no queens back then yet, so she never expected to be more than the daughter and later the wife and hopefully the mother of a king, herself. She was hailed as a great beauty, and in Gregory’s rendition, Richard III was not only her uncle but also her lover. Also in her rendition, Richard III did not murder Elizabeth’s two young brothers, the princes who were locked in the tower of London. They vanished, but no one knew for sure what happened to them… except, in this version, Elizabeth and her mother managed to smuggle a page boy in to the Tower instead of her brother Richard, and they sent Richard away in the dead of night.

Meanwhile, Henry Tudor won the battle against Richard III because Sir William Stanley decided to back him. He became King of England in Richard III’s place, and pledged to marry Elizabeth in order to join himself with the rival Yorks, so that (ideally) no one would be able to rally behind the Yorks and overthrow him. Considering Henry’s claim to the throne was tenuous at best–in fact, his mother Margaret used to be lady-in-waiting to Elizabeth’s mother–this was a very real concern. So real, in fact, that it consumed Henry’s entire reign and life.

The first time I almost stopped reading was when Henry raped Elizabeth every night for three weeks after meeting her, determined to prove that she was fertile before he would agree to marry her. This isn’t historical, but it’s based upon the fact that their first son, Arthur, was born 8 months after their wedding–so seems plausible. This really set the tone for Henry’s character as depicted by Gregory. He was a Jekyll and Hide character, flipping between loving and tender on one hand, and wild with suspicion of everyone around him on the other, willing to go to horrible lengths of evil in order to protect himself. According to Wikipedia, though, Elizabeth and Henry were a real love match. There were hints of that in Gregory’s rendition, and there was one brief moment in this version where the pair were truly in love. It didn’t last long, though. In fact, it baffled me that, given the way Henry behaved, Elizabeth didn’t literally plot his murder from the start. He had killed the man Elizabeth supposedly loved (Richard III), stolen his crown, raped Elizabeth repeatedly before their marriage, and locked up her innocent young cousin Teddy in the Tower of London for most of his life for the crime of being a male with a drop of York blood in him–and all of that was just for a start. Henry’s power-crazed mother Margaret was even worse than he was, because she seemed so much more self-righteous, believing that God was on their side and wanted them to have the throne at any price.

The plot for most of the book centered around the boy whom history calls Perkins Warbeck–a “pretender” to the throne who claimed to be Elizabeth’s lost brother Richard, who had been locked in the Tower of London. According to Gregory’s afterword, some historians believe that “Perkins” really was Richard, and in fact he was quite convincing in that role. Henry was obsessed with finding and murdering him–and Elizabeth, who lost two little brothers in such a tragedy, and whose cousin even now suffered the same fate at Henry’s hands, still stood by him in loyalty even as he plotted to kill this young man whom she knew might turn out to be her long lost brother after all. In this version, he is her brother, and comes to court long enough for her to meet and interact with him, though she can never acknowledge his true identity for his own protection. The only reason Henry doesn’t murder him at once, in this version, is because he falls in love with the boy’s wife, and has an affair with her. (This too defies Wikipedia’s assessment that he and Elizabeth had a happy marriage… if true.) But in the end, Henry has both Teddy and “Perkins” executed. I knew the whole time that Elizabeth’s long lost brother couldn’t take the throne, because there was a Tudor dynasty, after all… and yet, somehow, I just kept hoping it wouldn’t end the way I knew it must end. In the last pages, Henry is racked with horrible guilt for what he’s done, and asks Elizabeth’s forgiveness. She gives it to him. From a character standpoint, this made absolutely no sense to me.

At least when I read horrible headlines of current events, I have the recourse of prayer. I can pray against atrocities, and for the perpetrators and the victims both. But for history, when I’m made to feel the emotions of a dreadful story in such vivid detail, there is only helpless rage. What’s done is done. One thing that did occur to me, though, was that the antagonists of the story, Henry and Margaret, had never a moment’s peace. They were the very embodiment of evil, because they were not just power-hungry and selfish, but also constantly terrified that they could lose it all in a moment. For me, this puts a new spin on those who  occupy a similar position today. They can seem so glib and smug from the outside… but they’re probably terrified, too.

Anyway, I don’t think I’ll be reading any more Philippa Gregory novels, as talented as she is.

Language: I think there was a little but not much