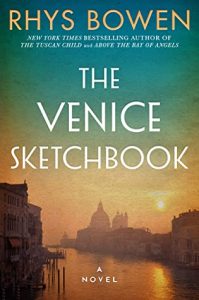 Rhys Bowen seems to have two similar yet different genres, and I’ve come to enjoy both: the witty tongue-in-cheek cozy murder mystery series, and those like “The Venice Sketchbook”: much more serious dramas which are nevertheless still slice-of-life, rich with detail and usually emphasizing a particular form of art. All of her novels are set in WWII Britain and Europe, and they are so episodic that I come to feel like I’m there.

This story followed really one main character, though a second was present just as part of the frame story. Caroline, a newly divorced single mom whose cheating husband took her son and now refuses to return him, using the collapse of the Twin Towers as an excuse (her story takes place in 2001), comforts herself by going to live with her grandmother after the recent decease of her great Aunt Lettie. As Lettie lays dying, she desperately tries to get across to Caroline that she wants her to have a particular box. Caroline roots through it and is perplexed to find a sketchbook inside, and three mysterious keys.

While she has to follow the mystery one piece at a time, the reader learns “Aunt Lettie’s” past interspersed with Caroline’s present, though Caroline does not yet know it herself. Lettie’s real name is Juliet, and she grew up in the era of WWII, where she visited Venice on several occasions. The first time, as a teenager, she met a young man named Leonardo and snuck away from her own overbearing aunt to spend the evening with him. He turned out to be the son of the Da Rossi family, one of the wealthiest and most powerful families in town. Her aunt whisked her away, and she could not even tell Leo goodbye. Ten years later, Juliet is far more disillusioned, working as an art teacher, when she has the opportunity to spend another year abroad in Venice. She jumps at the chance, and encounters Leo again–now betrothed to a woman he doesn’t love, but must marry because of his family connections. Unfortunately this is also the eve of WWII. We see Juliet’s life in Venice at the time in great detail–the art she drew and appreciated, the food she ate, the people she met, and the unsuccessful attempts she made to avoid Leo as their story progresses. The war encroaches closer and closer, and while Juliet intends to go home to England and to safety, circumstances transpire that prevent her best intentions.

Caroline, meanwhile, seems in some ways to mirror her aunt’s story: both of them are estranged from their toddler sons by means outside their control. Both of them are falling in love with Da Rossi men. Both wonder where their lives are headed, and likewise wonder if they can see themselves staying in Venice.

The story ends not exactly happy, but bittersweet. What I loved most about it was actually all the description. I love Europe, and I felt like I was there.

Violence: none to speak of (it was at wartime but nothing gratuitous)

Sexual content: present once but in a fade-to-black way