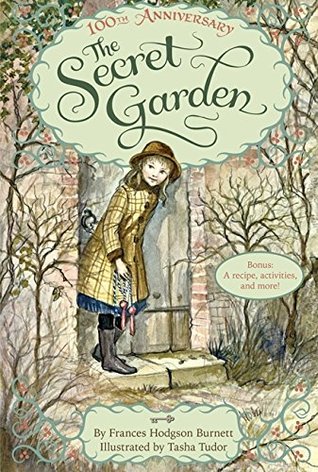 As a naturopathic doctor, this book fascinates me. While it pretends to be a children’s story, it’s really more of a morality tale on the power of the mind (and nature, laughter, and good spirits) to heal the body.

The story follows Mary, a sullen and disagreeable little girl who was orphaned and grew up always getting her own way. She goes to live at Mistlethwaite Manor, where she gradually meets servants who don’t let her boss them around and learns to care about people other than just herself. She hears the legend of a secret garden, which was shut up after the master of the house’s wife died. The wife had loved the garden, and he couldn’t stand to look at it because it made him too sad — or so everyone assumed. It becomes Mary’s mission to find the garden, and then to revive it to a state of health.

Eventually, Mary stumbles upon a great secret, well kept by the servants, though: the master has a son named Colin, a sickly and cross little boy her own age who is nearly as monstrous as she was herself, when she came to live there. But we come to learn over time that he is that way because he has been told all his life that he is going to die, and everybody felt sorry for him, so nobody had the heart to deny him anything. He therefore acts like a “rajah” of India, and spends all his time dwelling on how decrepit and miserable he is. But when he meets Mary, suddenly he has his own awakening. And then when he learns of the garden, he has something to live for and look forward to. Presently (spoiler alert), Colin decides that there is magic in the world by which he can get better if he just makes up his mind to do it–and do it he does.

I’m sure kids enjoy the book, but it might also be a good read for someone convalescing from a long or chronic illness.