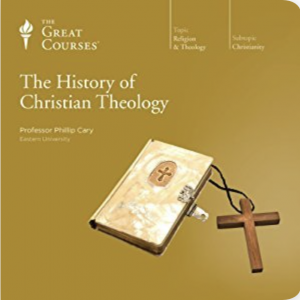 This is one of the best Great Courses I’ve ever taken. I was hesitant to purchase it, since most of the Great Courses professors tend to be liberal, overtly atheist, and condescending towards anyone who holds a different worldview. But I read the reviews before purchasing, and was assured that if Phillip Cary wasn’t actually a believer himself, he was at least sympathetic towards believers. As I listened, I became increasingly convinced that he shared the Christian faith, and that was finally confirmed toward the end of the course.

Aside from the professor’s attitude toward the material, I also found the course itself very enlightening. Church history is not actually taught in churches for the most part, so what I knew beyond what’s written in the scriptures themselves was a little of this and a little of that, but nothing sequential and clear. I knew of Martin Luther’s 99 theses leading to the creation of the Protestant church, and the horrible abuses in the church prior to that, but very little about the differences between various Christian denominations, or how some of the various doctrines that we take for granted today actually came about.

What struck me most as Cary enumerated the theological arguments through the ages was how many of them, to me, arose from overthinking. Cary made the point that the text cannot interpret itself, and, granted, everything requires interpretation to some degree. And I usually could see on some level why each side felt that their point was worth arguing, and why it became even critical to them, because of what theological implications logically flowed from one conclusion or another. I’ve had similar thoughts myself from time to time. And yet, I have to say even from my own experience in that dogmatic camp that in hindsight, in most cases, it’s just splitting hairs. I believe in a co-equal Trinity, for instance, because I think the scriptures strongly imply that, though they never say so in so many words. But if the Holy Spirit was a created being, or the Son was a created being before time–what would that really change? I can see how the dogmatic might say it could change everything because if this thing were true, then this, that, and the other clearly unbiblical doctrine must logically follow… but since we know none of those clearly unbiblical doctrines that we’re trying to avoid ARE really the case, why go to such lengths to argue what ultimately comes down to a point of logic with your Christian brother? If your brother majors on the majors and gets those right, even if their logic in arriving at those conclusions don’t seem perfect to you, so what? Let’s not bother arguing about what amounts to minutiae just for the sake of logical consistency.

Also, many of the great names in church history seemed to turn themselves into mental pretzels of theological angst with ideas such as, what if I lose my salvation later in life, but there’s absolutely nothing I can do now to guard against what I might do in the future? Or, then there’s the utter self-loathing that came from theological persuasions emphasizing sin and not the redemption of Jesus, even in such illustrious people as Martin Luther, or many of the Great Awakening preachers from whom we get the concept of preaching “hellfire and brimstone.” (Jonathan Edwards’ “Sinners in the Hand of an Angry God” sermon comes to mind. How terrifying, even though I can see that he truly meant well.) Grace is all over the scriptures, and yet so many of these great men of the faith apparently didn’t see it. That awareness took century upon century of theological understanding to be passed down through the ages, even though it was there in the scriptures all the time.

It was likewise enlightening to hear how certain ideas that seem so central to the Christian faith I’ve always been taught had a clear origin from one person at a moment in time, who was (in my view) the first to read the scriptures and really see what they said. I’m thinking of Phoebe Palmer, who began the holiness movement, focused upon having a pure heart and the transforming power of God’s grace in helping us to become holy. It was also her influence that served as a foundation for listening for the leading of the Holy Spirit’s “still small voice” (though like everything in its early days, that too was taken to absurd extremes.) All of these ideas are found in scripture, and it’s amazing to me that it wasn’t until the Civil War era that they finally came to the forefront of the protestant church.

But I suppose it should come as no surprise that in every generation, imperfect people got a lot right, and also got a lot wrong. I’m sure the same will be said of us one day.