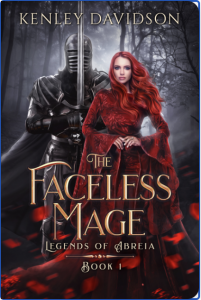 I love Kenley Davidson’s books. I can always count on them to be clean, semi-lighthearted action–it’s all intended to be serious, but not so gripping that I can’t go to sleep afterwards, so they’re great to wind down at the end of the night.

This story was very unique for the genre, I think: Leisa is the bodyguard to the princess Evaraine of the kingdom of Garimore. She was an orphan, rescued by Garimore’s king and raised in his household, so Leisa thinks of him as a father, the only one she’s ever really known. But she’s not only a bodyguard, but also a mirror mage, capable of shifting her appearance to look like that of someone else. So when the sickly and weak Evaraine receives an offer of marriage from a neighboring and much stronger kingdom’s prince, King Soren of Garimore sends Leisa in Evaraine’s place, wearing Evaraine’s face. He mistrusts the alliance and wants Leisa to spy and find out whether this is a good or a bad match.

That’s about all we need to know for the majority of the story. Once Leisa arrives, her betrothed gives her a stone to wear as a betrothal gift, which she immediately recognizes as a magicked item as soon as she puts it on. She finds out that it links her to The Raven, their king’s personal bodyguard. He is like a specter–always in armor, never speaks or even breathes loudly enough to be heard, moves silently and faster than should be possible, and apparently doesn’t sleep. Leisa also comes to wonder how such a powerful being (as she can tell through their bond that he is very powerful) came to be enslaved in such a horrific way. In time, through their bond she learns to communicate with him. He figures out that she isn’t who she pretends to be. Meanwhile, she learns that the alliance is essentially a trap, looking for an excuse to provoke war. And she fears that the Raven will be forced to blow her cover to the king, compelled to do the king’s bidding as he is–or worse, that he will be compelled to kill her.

The most unbelievable (and also slowest) part of the story was the budding relationship between Leisa and the Raven, though it was kind of the crux of the story too. It was hard to develop that relationship considering they couldn’t talk even in their minds for the first 3/4 of the story, so the entire thing had to occur in each of their minds and through their interaction. I kept wondering how in the world she would wrap the relationship up with the little bit of the story that was left, and then I saw that it was the first of a series. I immediately went out and downloaded the next one.