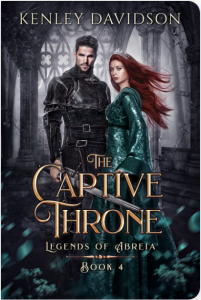 As the end of a series (a duology in this case, where Evaraine and Danric are the main characters, in the larger series of Abreia), this one kind of fell flat to me. The world is the same as it was for the first two books, so that wasn’t the issue — I still get immersed in Davidson’s alternate worlds, always peppered with magic and political intrigue. But in a fantasy romance, the characters are paramount – and this pair just didn’t do it for me. I think it’s because they were both so understated and reserved, which made for very little chemistry.
The story picks up after Danric learns that his father isn’t really his father, but a mirror mage impersonating his father. His brother, meanwhile, is also a mage, and he’s missing too. Danric has spent all his life thinking magic is evil, and Evaraine thus assumes that, even though they’re already married by the time the book opens, he’ll want nothing to do with her once he learns that she’s a mage too. She’s spent all her life hiding her specific gift of taking the life force of other creatures, afraid that she might lose control, and also that anyone who knew would think her a monster. (This is certainly a good excuse for why she is so reserved.) Danric, meanwhile, is the proper crown prince, and he’s all duty. He ends up being Evaraine’s travel companion when she goes back to her own nation of Farhall after learning that her father the king is being controlled by a mage as well. Meanwhile, a strange series of wraith creatures threaten both their kingdoms–and only mages, and particularly those with Evaraine’s gift, are any match for them.
The characters are well sketched, I just think they’re ill-matched to each other. Chapters alternate between them, so we learn what they’re really thinking, at least… I just didn’t feel the tension between them I suppose. This rendered what would otherwise have been a great, if common scenario (a secret marriage) far less interesting. Like all of Kenley Davidson’s books, though, this one is great for winding down before bed.
My rating: *** 1/2
Language: none
Sexual content: none
Violence: fantasy only
Woke content: none