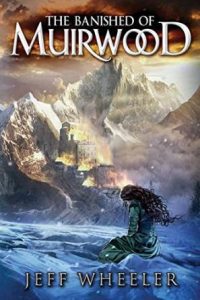 Another winning start to a series by Jeff Wheeler. I’ve come to be very familiar with his fantasy worlds, which are all interconnected. This one was probably written before the Harbinger series, as the Harbinger series references what happens to Maia as Sera’s ancestor. Because of this, there were a few spoilers, but it really did not detract from my enjoyment.

Maia is a princess whose father disowns her due to his failed marriage to her mother, since her mother was never able to bear any more living children after Maia. Her father casts off her mother, though he is not allowed to legally divorce her since they were married by what they call an irrevocare sigil, and she was not unfaithful to him, though he was to her. He makes his mistress the new queen, and his children by her his legitimate heirs–and here, the story is very much a Cinderella tale. Maia is despised and humiliated in every way, and finally banished with a kishion as a “guide,” though he is meant to kill her under certain conditions. (This might be inspired by the huntsman who fails to kill Snow White?)

But this is where the comparison to the fairy tales breaks down. Maia finds that she has become a hatayra (sp? since I listened rather than read this), which essentially sounds like demonic possession. She did not give her consent, which is not usual, and she longs to be freed from the myriad one who possesses her when she sleeps. (Maia dreams when she is possessed by the myriad one, which is an effective device for conveying her back story.) She can only be freed by an aldermaston of an abbey, so she searches for her freedom and encounters obstacles along the way. She also finds an unlikely and ultimately forbidden romance.

Like most of Wheeler’s stories, this one is episodic and contains multiple twists and turns, rather than one clear conflict with rising and falling action. I always fall in love with his characters, though, and his plot twists keep me guessing!