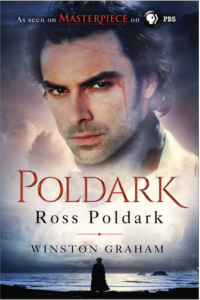 My husband and I are watching the “Poldark” series, so I picked this up–not realizing that the series is quite so long! Each volume has a different character’s name on it, too, and apparently they include Ross’s children by book 3. So I’m wondering how that’s going to translate to the series–is it going to be a sweeping family epic, or will they keep the same characters and go off-script from the books?

Anyway, the story opens with Ross Poldark, a British captain, lying bleeding and left for dead on American soil during the Revolution. He returns home with a scar on his face and a limp (which isn’t in the series), but he’s been away for years. When he gets home, he finds that Elizabeth, the woman he thought himself all but engaged to, is now about to marry his cousin, Francis. He still loves her and is devastated–though Graham sticks to what can be observed from the outside, for much of the book. He occasionally will venture inside Ross’s head, but what he shows us is so terse and “stiff upper lip” that he might as well not have bothered. Ross comes off like the sort of man who would have a very hard time even labeling his feelings, let alone expressing them. (I can definitely tell the book was written by a man!)

Ross also finds that his father has died, the two servants his father left behind are utterly worthless, and Ross has a job trying to make them earn their keep. He owns a mine, but it’s hardly profitable. He employs many miners too, and owns additional properties, but he’s inclined to give them away for free. He sympathizes with the struggles of the lower classes to the point where I can’t quite figure out how he manages to maintain himself financially, let alone everyone dependent upon him. There’s a lot of intrigue to do with financial loans, bankers, gambling, miscarriage of justice, and more, but it’s all very episodic–which lends itself well to a TV series.

Ross’s relationship with Francis is strained over his marriage to Elizabeth for awhile, though they try to make amends, since they are Ross’s only family. In the series, there’s a very clear love triangle even after the wedding, but in the book it’s clear that Elizabeth doesn’t love Ross anymore and she really did want to marry Francis. (Francis, however, has almost zero redeeming qualities, so this seems pretty hard to fathom.) By and by, Ross rescues a 14-year old girl from an abusive father, and employs her as his kitchen wench. This sets off a big row because she’s under-age, and it looks like he basically kidnapped her. Demelza at first is so dirty and bedraggled and underdeveloped that she could be mistaken as a boy. But years pass in the span of a few chapters, and suddenly she’s 17, and spirited, if not quite a beauty.

When Demelza’s formerly abusive father suddenly finds religion and comes to fetch her home, Demelza realizes that she adores Ross and can’t bear to leave him, but she suspects that he would consider it the right thing to do. The only way she can contrive to stay is to seduce him. So she does, very clumsily, but he capitulates in the end. Always one to do what he considers to be the right thing, Ross promptly marries her after that. This is the most introspective segment of the novel: we get glimpses into both Demelza’s and Ross’s minds as their relationship progresses. It’s sweet, in both the show and the book, to watch them fall in love after the fact, and become happy together.

I’m enjoying the show, but the book is so very similar to the show, and I don’t gain much additional insight from the narration. So I may not read on. We’ll see.

Sexual content: present, but very much in a fade-to-black kind of way