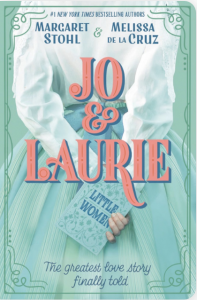 Oh!! I would give this 6 stars if I could! Before I get into the review of the story itself, some background: when I was in high school, I had this book I passed around to friends and family with a quirky question at the top of each page that each respondent was to answer. One of the questions was, “How do you feel about the fact that Jo didn’t end up with Laurie?” Because it was so traumatizing to me at the time. “Little Women” would have been one of my all-time favorite books, had Jo not refused Laurie… but because she did, the only other time I reread it was partial. I stopped after his proposal, so that I could pretend she accepted him later… and I never read it again.

Having listened to the afterword of this book, apparently I wasn’t the only one. I never realized that “Little Women” was actually published in two separate installments, nor that the story was based upon Louisa May Alcott’s real family and life (loosely), nor that in the interim between the two volumes, readers really did write her to say exactly what I felt: that Laurie and Jo must end up together. Reportedly she really did say that she wouldn’t marry Jo to Laurie for anything… which is quite peculiar, since apparently Laurie wasn’t exactly a real character in Alcott’s life, but was an amalgamation of several different people. So why not marry her off to him? That seems to suggest something quite interesting about Alcott’s own personality, since she of course identified with Jo.

This whole back story was the premise for this book, and it was so cleverly done. In it, what we know as volume one of “Little Women” has been published with Jo herself as the author. Her publisher is after her to write the second installment, in which she marries everyone off. She’s indignant about this, and attempts to do so but makes several false starts. In the interim, Laurie declares his love for her, and she rebuffs him–just as she ultimately ends up doing in the second volume (and this serves as her inspiration for writing it). Beth has already died even though apparently she only dies in volume 2 of “Little Women” — and Jo keeps trying to figure out how her story will end since she can’t bear to kill her off in fiction too. But because this retelling lives in a “meta” world, “Little Women” can still be what it is, while Jo’s “real” life can turn out quite differently. So all the things that I had hoped and later pretended might have occurred in the latter part of the original book really happened in this one. It’s predictable, of course: Laurie pines for her, and attempts to forget her by quickly getting engaged to someone else instead (not Amy this time, thankfully). Jealousy drives Jo to realize what she’s lost, and then she gets her second chance. I listened to the final scene three times, I kid you not. I’ve waited decades for this resolution! 🙂