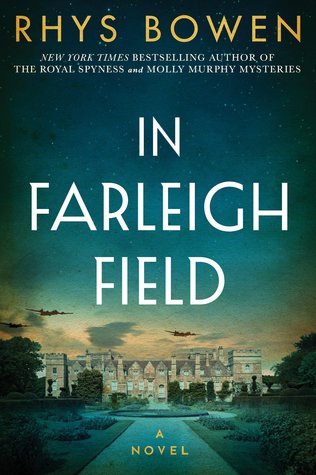 Set in WWII Britain, “In Farleigh Field” is the sort of novel I guess I’d call “sweeping,” in the sense that it covers many different characters, most of them aristocracy in the highest circles. A parachutist falls to his death in Farleigh field, and even though he’s dressed in a British military uniform, he has no ID. Various people begin to suspect that he was a German spy. But if that were the case, why Farleigh? What could the possible connection be? Each character tries to figure this out in his own way, and each begins to suspect everybody else. Pamma, one of the sisters who grew up at Farleigh, is thought to work at a paper-pushing desk job… but she’s really a code breaker. Ben, the son of the vicar, injured his leg in a plane crash before the war, and is therefore not in uniform. Everyone thinks that he’s a mere courier, and treats him that way–but really he’s working for MI5. He discovers that there is a twisted sort of patriotism among the British Aristocracy that calls themselves the Ring: their goal is to murder the royal family and put the Duke of Windsor back on the throne, because he has pro-German leanings. With him at the helm, Germany will invade, and therefore the war will be over, and they can go back to life-as-usual. So was the parachutist connected to the Ring?

Meanwhile, Pamma’s boyfriend Jeremy escapes from prison camp and makes his way home–but he’s so changed she hardly knows him. Ben has to deal with watching them together, because he’s been secretly in love with Pamma for years. Pamma’s younger sister Phoebe and a local Cockney boy take it upon themselves to investigate the parachutist’s identity themselves. And Pamma’s older sister Margo gets picked up by the Gestapo in France and tortured (mildly) for information, because she and her lover are both members of the Resistance. They let her go… but only if she will infiltrate the Ring in Britain and further their cause.

Rhys Bowen is a master at historical British fiction! I wouldn’t know where to start, to believably create a story like this. The intrigue was great, and the characters mostly sympathetic (except for Jeremy–she did a great job of making him subtly despicable from the beginning, even though it was in such a way that you *could* explain it away, but you didn’t really want to.) I love reading historical fiction because I actually learn something at the same time (especially when there’s a note at the end that tells you what’s true and what’s not.)