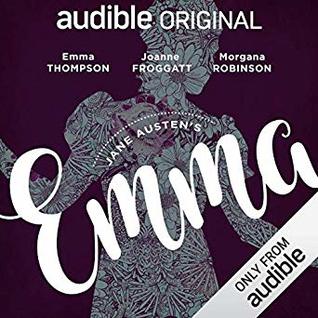 It’s only been a few years since the last time I read “Emma,” but I couldn’t resist this Audible dramatization, narrated by Emma Thompson and performed with a semi-full cast (though I think there were only two others involved: another man and woman performed all the male and female characters). It might have been my favorite experience of the story yet. There were even sound effects, like chirping birds and the dull roar of a crowd, that made it seem more like watching a movie than listening to an audiobook.

My ONE complaint about this story is how Jane Austen glosses over the actual climax in narration rather than in dialogue. We’ve just invested an entire novel in this story, let us experience the fulfillment of it! Her editor, if she had one, totally should have caught that. Otherwise, it’s a thoroughly engaging story, even if it does follow the template of most of Austen’s tales — the unlikely suitor, the “red herring” suitor who inspires jealousy, the silly characters filled with inappropriate self-importance. It’s just so much fun.