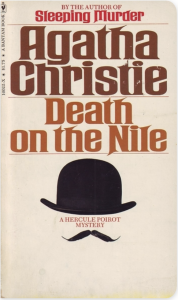 I just finished reading this aloud with my husband, though I’d read it once before. Some 15 years ago, I was in the stage adaptation, as the heiress/murder victim (though I’m nearly sure my name in the play was Kate Mostyn, not Linnet Ridgeway/Doyle. But the play was also called “Murder on the Nile,” so perhaps they changed other things too.) I was surprised that all I remembered from reading it was who dunnit, but not any of the rest of the details.

My husband, for his part, thought the story was frightfully dull and full of ancillary characters that he didn’t care about and couldn’t keep straight. I’d have to agree–characterization wasn’t nearly as important in the 1930s as it is today, I suppose. He never gives up on anything, and yet he was just about to throw in the towel on this one when Linnet FINALLY died, halfway through–only then did the story become mildly interesting.

As with most of Christie’s murder mysteries, everyone has a motive, and nobody really likes the victim. That’s what makes it interesting. It’s a quick and easy read, and while it ends the only possible way it could, Christie sets you up to think the obvious answer is impossible. I do like the fact that hers are “polite” murders–they’re not terrifying thrillers or gratuitously violent or anything like that.

Violence: none (for a murder mystery)