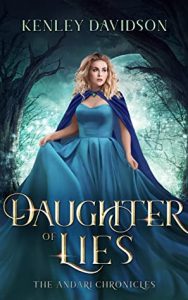 I know what I’m getting with the Andari Chronicles at this point, but it’s always delightful to see how Davidson will pull it off this time. They are all unusual, creative, and very loose retellings of fairy tales. This one is a retelling of Snow White, but… barely.

The main character Brenna, first of all, is not especially beautiful. She’s not a princess, either–she thinks she’s a long lost countess, though in a previous book in this series, she was a supporting character who was a spy, and very good at her job, too. She finds court doesn’t suit her at all, and she’s trying to adjust to her new identity. Meanwhile, someone apparently wants her dead… and she thinks it might be the woman she’s just discovered is her mother. Her mother is obsessed with her own youth and beauty, and is trying to snag the “prince” (who isn’t a prince, though he does have a title) for herself, though she isn’t aware that he, Rom, is actually also a spy.

Brenna, meanwhile, has to flee for her life, pretending to be a bar maid and living with some down-and-out women (in lieu of the dwarves). Her “mother’s” ultimate reason for wanting her dead feels a little forced, but it doesn’t matter–the structure of the fairy tale itself is reason enough. Brenna is definitely not a damsel in distress, and it turns out this is the very quality that makes her so attractive to Rom.

Like all the stories in the Andari Chronicles, this too ends happily ever after. They’re all light reads, entertaining, and clean, which I definitely appreciate!