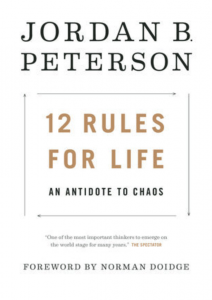 This was so good that after listening to it, I bought the kindle version so that I can highlight and take notes, and then journal about some of the points he makes to glean deeper insight and solidify the concepts. It’s interesting to me that I liked it so much now, since a few years ago when Peterson first became a YouTube sensation and others told me about him, I wasn’t all that impressed. At the time, I felt like what Peterson said was just common sense, and wasn’t worth getting all that worked up about.

Since then, I’ve started to listen to him again, perhaps with fresh eyes and new respect for all he’s suffered at the hands of cancel culture, and his courage to continue to speak reason and truth anyway. It was this integrity, I think, that intrigued me, and made me take a second look. He’s not selling something. He’s not trying to be an internet sensation, or a bestselling author, though ironically, due to the controversy surrounding him, he’s become both. He’s incredibly articulate, with a gift for putting words to concepts that seem nebulous to most but widely felt or recognized. But I think most intriguing of all, he seems to be on his own spiritual journey, and he’s humble and vulnerable enough to let us watch.

Peterson quotes an inordinate amount of scripture, more than any other philosophical or religious source, and reverently for the most part. But then he questions it, like a seeker who has not yet arrived at a comfortable position. He mythologizes and symbolically generalizes stories that the writers of scripture clearly intended literally–but he takes the main point from them anyway. As a result, his 12 Rules ultimately end up being very biblically consistent, backed up with his years of clinical practice and peppered with profound insight into human nature. These are what I intend to go back and ponder.

Definitely very well worth owning this one.