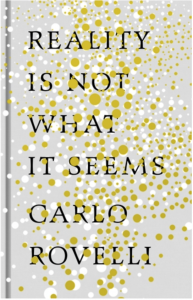 This was so mind-bending that after listening to it on audio, I had to download the kindle version and read it so I could highlight. Even then I had more highlights than I could export, and I think I’ll have to review what I do have to get a better grasp. I’ve read a lot of books on physics and quantum physics for laymen, and this is the first one in a very long time that I felt both gave me a better understanding particularly of the historical progression of discoveries, and also suggested something new. I was not aware that there was a rival theory to String Theory: Loop Quantum Gravity, which actually (according to this author anyway) seems to be a better contender for unity between quantum and Newtonian physics. What blew my mind most was the idea that time, like all macroscopic objects in the physical world, is an emergent property. On the quantum level it doesn’t exist, any more than a single object, as such, exists. It’s all averages of where individual particles are likely to be in space at any given time.