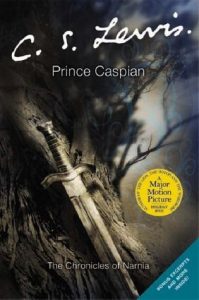 It’s odd reading these in their chronological rather than their published sequence… I’ve always read this one second before, but I really think it adds a lot to read them in the story’s true sequence.

Peter, Susan, Edmund, and Lucy star in this one as well, but they’re called back into Narnia what feels like a year after they left the last time, but thousands of years later in Narnia. Now, the Telemarines rule in Narnia, and the old ways have been suppressed. Prince Caspian is the true king, but his uncle is a usurper and pretender to the throne. He had Caspian’s father killed, and once he produces an heir of his own, he tries to have Caspian killed as well.

Meanwhile, Caspian isn’t even sure he believes in Old Narnia anymore: all the old talking animals, dwarves, giants, dryads and naiads, Aslan and the kings and queens of old… though he desperately wants to. We meet Caspian through the eyes of a dwarf who comes to fetch Peter, Susan, Edmund, and Lucy, and then takes them to Caspian to fight against Miraz and his army. It’s some time before Aslan enters the story, but he always does at the critical moment in which all may otherwise be lost. But unlike the Lion, the Witch, and the Wardrobe, Aslan doesn’t just charge in and make everything right. He lets the people fight their own battles, he just makes sure that people arrive when they should, and have the proper aid they need when they need it.

It’s so creative, how each of these stories tells a very different angle of the world of Narnia, but with a common thread.