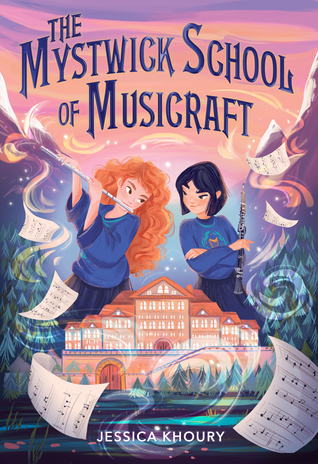 Such a delightful middle grade novel!

Audible made this a freebie for the month of October, and I could see why when I got to the end: the climax takes place on Halloween, specifically because that is the day of the year when legend has it the veil between worlds is thinnest.

The story follows Amelia Jones, a 12-year old girl who has dreamed of entering Mystwick School of Musicraft (an analog of Hogwarts except with music) since her mother died when she was very young. Her mother was a maestro, and she dreams of becoming one too. Only problem is, while she’s talented enough at the flute compared to ordinary people, Mystwick only takes the best of the best. She flubs her audition, but due to a mix-up, she ends up in Mystwick after all–only to find out that it was a mistake. Another girl of the same name who happened to be a piano prodigy tragically died prior to receiving her acceptance letter, and our protagonist got that Amelia’s letter by mistake. Now not only does she feel like a fraud, but she’s sharing a room with the other Amelia’s best friend, since they were originally slated to be roommates. You can guess how that goes over. Things go from bad to worse when it seems that Amelia is being haunted by Other Amelia, determined to punish her for stealing her spot.

It’s a fun and whimsical tale of magic through music (made all the more dynamic because the audio recording actually has musicians playing the pieces mentioned in the background), of coming-of-age, and of learning to believe in yourself. I actually teared up a little at the end, even though the end was predictable. That doesn’t matter when it’s well done!

Violence: fantasy only (and basically none)