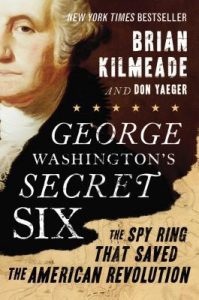 This would make a great movie! It’s the untold (until the 1920s anyway) story of six spies during the Revolutionary War who fed critical information to George Washington at great personal risk, very possibly (as the subtitle says) influencing the war’s outcome. They were so secret that even Washington himself did not know some of their identities, and after the war was over, several of them were potentially regarded by their fellow Americans as traitors, so effective was their cover. This makes me so sad for them… it’s like (Harry Potter spoiler alert) Snape seeming like a villain to the entire wizarding community for the entire series, only to be vindicated after his death.

A series of letters were discovered in the 1920s just after WWI and before WWII, and because of this they went largely ignored at the time, to be unearthed yet again decades later. These letters revealed the identities of five of the six in the spy ring in great detail, showing how Washington decided upon the nature of the ring after learning what not to do through the tragic execution of Nathan Hale. It also described the critical information they fed to him which led to the downfall of not only Major Andre, one of the British spies, but also foiled Benedict Arnold’s plot to take over West Point. Had this succeeded, it almost certainly would have turned the war.

Only one of the Culper Ring was ever caught: Agent 355, the only female of the bunch and the only one whose identity has not yet been revealed. She may have died aboard the British prison ship, or she may have escaped and gone on to live a long life post-war. After the epilogue, the book includes the list of the top seven candidates for Agent 355, including the evidence both for and against each candidate.

How sad that people who risked so much never got any of the glory for it. But, that’s not why they did it.

Violence: present (it was war) but nothing too gratuitous