My Review of Station Eleven: 5 Stars 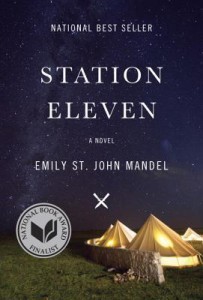 I’m not even sure how to rate this book.

It’s described on the back as a “tapestry,” and that’s very much how it feels: I am impressed with the way the author moves through time and between character’s viewpoints seamlessly, and you just have to go with it and figure out where you are now as you go. Some chapters are ten or twenty pages and some are a paragraph. Some are interviews with characters and some are unfolding events. I will say I am thoroughly impressed with the *way* she tells the story. What she’s created required prodigious skill.

I also think her characters are believable, and her level of detail is masterful. She really paints a scene so that you feel like you are in it.

She’s quite outside-the-box in terms of her plot details too. It’s an apocalyptic novel, but it’s not a book about survival so much as what happens after all the drama is over–the rebuilding, creating a new world. There’s a prophet who borrows his theology from a few out-of-context verses from the book of Revelation combined with comic books he memorized as a kid. There’s an actor who realizes that he’s spent his entire life seeking purpose in something that doesn’t actually matter. There’s the actor’s ex-wife who is a “nobody” and can never get used to the paparazzi.

What I was left with thematically, though, was this idea that every character in the book, whether from before the apocalypse or after, has spent his entire life seeking something in terms of a career or a purpose that he believed would bring him happiness. Some of them achieved their goals and some didn’t– but still, none of them are actually happy. “Sleepwalkers,” they are called–people who figured out that their childhood dreams were impossible and eventually got on with the business of life… but because it involved the death of their dreams, they are never fully alive. And yet those who actually achieved their dreams are equally empty.

At the same time, by the very vignettes she chooses to tell, Mandel shows clearly that what really matters are people and relationships and love. But nobody figures this out in time. Almost everyone (except for a minor character) ends up bereaved, deranged, filled with regret, and isolated. Nobody ever says this in so many words–but at the end, when they are dying or have otherwise crossed the point of no return, what they think about are the people they love. They remember the little details about them. They appreciate beauty and simple pleasures. That is the purpose–not all those grandiose ideas they spent their lives chasing.

All right. Much as I felt a little hopeless and puzzled by the time I finished reading this book, I think I just talked myself into giving it five stars. It had something worthwhile to say and did so in a very impressive way.