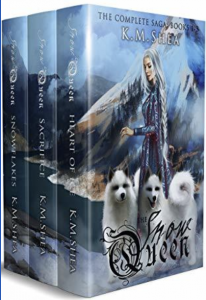 A fun, clean fairy tale retelling! Best listened to, I think, rather than read.

I don’t know the actual Hans Christian Anderson version of the Snow Queen; all I know is “Frozen.” This duology (it’s two novels and one set of short stories, which I didn’t read) is similar to “Frozen” in feel but completely different in plot. The Snow Queen is actually Princess Rakel, who was (as in “Frozen”) banished because she was feared for her magic. She did build an ice palace, and finally was enticed to use her power on behalf of her people to help them expel an existential threat. She meets her cast of colorful characters — her exuberant and flirtatious best friend Phile (who takes the place of her sister Anna), the various men of her military, and then the even more powerful enemy warrior, Farrin Graydim (good name!) who turns out to be the love interest.

Somehow I didn’t feel compelled to attend to the details of the story too closely, I just kind of got an overview of the overall feel of the story. It was sort of like putting on a movie I’ve seen a hundred times as background noise. I got the general gist that Rakel was misunderstood but had a heart of gold, and lowered her defenses quickly at the first sign of affection from anyone around her. The people always adored her. I wasn’t terribly clear on who was attacking her city or why, only that she had to defend them, the bad guy was nasty but he’d lured Farrin to his side because Farrin had a rough past. But Farrin was so clearly in love with Rakel that it didn’t take much for him to switch sides, if only she convinced him that she wanted him to, and that she forgave his past misdeeds.

I wasn’t into the story enough to make me want to listen to all the short stories afterwards, but it was a fluffy, feel-good listen.