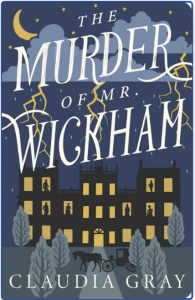 A great idea, though the execution of it was so-so.
In this blend of Jane Austen and Agatha Christie, many of Austen’s main characters assemble in a house party thrown by the Knightleys. Unfortunately, George Wickham crashes the party, and then turns up dead. It’s many years since several of the books have taken place, and so Elizabeth and Mr. Darcy have a grown son, Jonathan, who, with Juliet Tilney (and I didn’t catch who her parents were supposed to be) are the main characters and sleuths to find the murderer.
There were (naturally) many allusions to Austen’s original stories, and I could tell that the author was trying to be faithful to the characters–yet somehow they still felt like completely different people. Perhaps this was because Gray’s writing style is so very different from Austen’s. It lacked her biting wit and tongue-in-cheek social niceties fraught with underlying meaning.
I gathered that Jonathan, meanwhile, was supposed to be somewhere on the autistic spectrum. That seemed anachronistic to me–if such a thing existed at all in those days, it must have been exceedingly rare, judging by statistics (cases are skyrocketing now, but that’s because the world is soooo much more toxic now than it was in the Regency period). Speaking of anachronism, there were also big chunks of the story devoted to modern political issues which would have been almost unknown then. That definitely pulled me out of the story, as did the author’s tendency to insert her own (currently popular) religious understanding in the character’s mouths.
I will say that while I thought there was little way for her to resolve the murder without desecrating one of our beloved heroes or heroines, she managed to do it in such a way that did not do so. So that part was nice!
My rating: ***
Language: none
Sexual content: none
Violence: none (other than there’s a dead body, but it was a “polite” murder)
Woke content: moderate