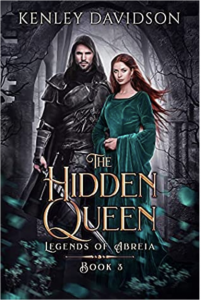 Leisa’s and Kyrion’s stories get wrapped up by the second book in this series; this one picks up with peripheral characters from the first two, Princess Evaraine of Farhall and Prince Danric of Garimore. Neither seemed like compelling characters in the first two books, so that was an interesting choice. But Davidson took what we already knew about them and expounded in this book in ways that did actually turn out to be interesting.

The entire premise of the first two books was that Evaraine was betrothed to Prince Vaniell, the younger prince of Garimore, but it appeared to be a ruse for Garimore’s control over Farhall. Leisa had previously impersonated Evaraine in the Garimorian court, as a mirror mage. In this book, Evaraine herself, weak though she is supposed to be, has to go to court herself now that Leisa has been sent to marry the elf king. We’re told at the beginning that she and Danric have a bit of a history: as children, they corresponded after the death of Evaraine’s mother, and he comforted her, in his own blunt way.

Now Evaraine’s betrothed, Vaniell, is missing, and it appears that he has no intention of ever marrying her. Now that we’re in Evaraine’s head, we also learn why she seemed to be so weak: she’s a mage too, with the power to take other people’s life force with a touch. She actually needs it in order to have enough energy to live, but her morals prevent her from doing so, except when in dire need for self-protection. Meanwhile, the anti-mage Prince Danric and she discover that Vaniell himself is a mage, and Danric’s father, King Melger, isn’t Melger at all but a mirror mage himself. In their attempts to unravel the unknown mage’s plans for conquest and protect their respective people, the two of them grow closer in spite of themselves. It’s a strange romance, really–both of them are so reserved, for different reasons. It’s not the whirlwind passion that Leisa and Kyrion had by any means, but it’s intriguing nevertheless. And the ending set up a very interesting dynamic for the fourth and final book in the series.