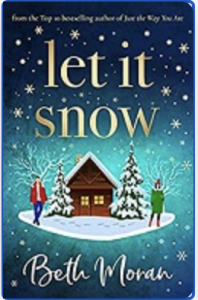 Another winner from Beth Moran! I just love these feel-good chick lit Christmas stories, all set in Sherwood Forest.

This one follows Bea, a local weathergirl on the news channel who has been in love with the same on-again, off-again boyfriend for most of her life. Adam is a would-be rockstar who always seems to put his career ahead of her. Meanwhile, her family runs a school for troubled kids (Adam was one of them back in the day), and her anal mum is terribly excited that for the first time in years, Bea will be home for Christmas. She’s planned activities every second of every day, including their yearly talent pageant put on by the students of the school.

When Bea arrives, she finds that she’s seated next to Henry, the boy whom her family has declared that she will marry most of her life, even though (she thinks) they’ve always intensely disliked each other. Henry is a physics nerd… only suddenly, he grew up to be quite good-looking. Also, she realizes that most of what she thought she knew about him was wrong. Like, maybe what she took to be arrogance was actually shyness. As she begins to contemplate all of this, she gets a call that she’s been selected to interview for a national weather position–the only problem is, the interview is in Scotland, and it’s on Christmas Eve. One thing leads to another, and Henry ends up offering to drive her.

The story is quite episodic (as all of Beth Moran’s books are), so I won’t go through all of the episodes that make up the rest of the story from here. Ultimately, it’s all about relationships, and how Bea learns who she is, what she wants out of life, and what really matters to her. The romance between her and Henry is just so sweet and endearing–it feels sort of like a Sandra Bullock movie.