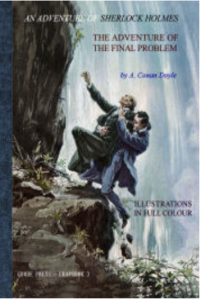 After reading “A Study in Scarlet” and then “The Hound of the Baskervilles,” I looked up which were the best Sherlock stories and chose this one, since apparently it’s the only one that actually features Moriarty (really?? Given how prominent he is in all the adaptations, that’s amazing!) A good chunk of the story describes Moriarty as the criminal mastermind overseeing all London operations of crime at an almost supernatural level, but it goes in to absolutely no detail in how he does it. I suppose this didn’t really matter–the point was, he was Sherlock’s equal, as he must be in order to bring about the great detective’s demise, and to do so in such a way that Sherlock’s death also serves a greater purpose. But I’d had the distinct impression from adaptations that Sherlock faked his death… and this one really leaves little doubt in the reader’s mind that he is, in fact, gone. (Apparently, as I read elsewhere, it left so little doubt that many readers cancelled their subscriptions to the periodical in which it appeared, in protest. I don’t blame them!) But Doyle was tired of being pigeon-holed into Sherlock stories and wanted to do something different, so he killed him off–and faced appropriate backlash. Later, apparently, it was so extreme that he made up an excuse for why Sherlock wasn’t dead and wrote another entire series of tales.

At any rate, this short story intriguingly introduced Moriarty, but in very vague terms, and then simply described how Sherlock tried to evade him with Watson’s help. Ultimately, of course, Sherlock allows himself to be confronted and killed, because even in death, Sherlock cannot be overpowered. The next one I’ll have to read is The Adventure of the Empty House, where he supposedly comes back to life again…