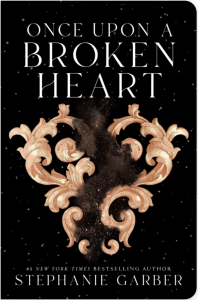 There is something magical about the combination of Stephanie Garber’s narrative style, and Rebecca Soler’s voice. The world created by the combination of the two is delightful, almost regardless of the actual story. I’m glad, though, that this story is set in the same world as Caraval–in fact, Scarlett and Donatella are both peripheral characters, though Tella is mentioned more frequently because Jax (the Prince of Hearts, whose heart Tella broke) is the male lead. I don’t remember all the details of the Fates that were freed from their imprisonment in a deck of cards in the Caraval series, but it doesn’t really matter; one needn’t have read the first series in order to follow along with this one.

The story follows Evangeline Fox, a girl whose true love, Luc, suddenly became engaged to her stepsister Marisol. In her desperation to stop the wedding, Evangeline prayed to the Prince of Hearts, who appeared and agreed to answer her plea–for a fee of three kisses, to be given to a recipient and at a time and place of his choosing. Evangeline knew at the outset that Jax was not to be trusted. So when Jax’s method of stopping the wedding turns out to involve turning the wedding party to stone, this unfortunately doesn’t excuse Evangeline from her end of the bargain.

Garber creates a new event, similar to Caraval, called Nochte Never Ending: a ball in which the realm’s Prince Apollo is to choose a bride. Apollo appears to be arrogant, bored, and utterly devoid of feeling, until Jax chooses him as the recipient of Evangeline’s first kiss. The whirlwind romance that ensues (on Apollo’s side, at least) is gag-worthy, but most of that is intentional, a result of curses and spells. As the tale goes on, Evangeline learns that Jax had an ulterior motive in his desire for her to marry Prince Apollo: she appears to be the subject of a prophecy, of one who will open the Valerie Arch. Unfortunately, Evangeline has no idea what the Valerie Arch is, why Jax wants it opened so badly, or why other characters desperately want to keep it closed.

This is definitely a story for women only, I think–more so even than most romances. It’s alllll about kisses, romance, attraction, and obsession, to the point where it was even a little too much for me. It’s clean, at least, though–there’s one scene that seems like it might get a little pornographic, but it never actually goes there. When the story is not focused on romance, it’s heavy on fantastical description (and there are really an inordinate number of ball gowns). I still really enjoyed it, though, mostly because the whimsical settings were so rich that I felt like I could get lost in them.