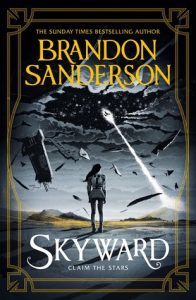 Wow, what an ending!!

I thought the story started out a bit slow, and even uninspired, seeming to be a mash-up of “Top Gun” and “Ender’s Game” with a teenage female protagonist. Spinna (spelling unknown since I listened rather than read) is the ultimate tomboy who idolizes her pilot father in a world where humans have colonized a planet called Detritus. They are engaged in an epic, ongoing battle with the Krell, who seem bent on human extinction–though no one even knows what a Krell looks like, let alone their motives. Spinna aspires to be a pilot like her father, until one day her father supposedly turns coward and runs from the fight, causing him to be shot down by his wingmate. Spinna subsequently grows up branded the daughter of a coward, and it becomes almost her caricature “core issue,” as she’s obsessed with proving everyone wrong.

Despite that caricature, though, I thought the characterization overall was good enough that I kept going, which is unusual for a sci fi story for me. As it progressed, I felt like the characters evolved and deepened. Spinna has to fight tooth and nail to be able to even go to flight school, and then (much like “Ender’s Game”) the majority of the book is her exploits at school, learning to fly and impressing people in spite of themselves. Her call sign is Spin, because of her name and also because that’s what her father called her. She starts off hating her flight leader (Jorgan, whom she calls “Jerkface,”) but of course that’s a setup for an enemies-to-lovers plot, which I can already see germinating for future books in the series. (Proverbial, but I nearly always enjoy that trope anyway).

It’s the ending, though, the last probably 10 chapters or so, that made me give it 5 stars. It’s rare for a book to pull off redemption THAT well. Sanderson managed to set up a believable, highest-stakes-possible scenario with everything against her. Even the setup had me almost tearful with anticipation of how awesome the payoff was going to be–reminiscent of “Harry Potter” in that way, or of “The Last Battle” in the Chronicles of Narnia. I immediately bought the next book in the series before I’d even finished it. It was that good.

Violence: none (it was there but not explicit)