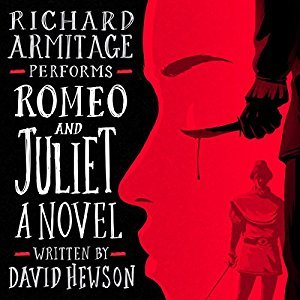 This was an incredible retelling! I’ve never been great at deciphering Elizabethan English, nor am I especially disposed to try. Hewson did not modernize the setting (it’s set in 1499 Verona, though this is more specific than Shakespeare was), but he did update the language so that it reads like a novel. This was immensely helpful to me both in terms of enjoyment, and also understanding characterization nuances I either never caught before, or that Hewson invented in his retelling. I love his interpretation of Juliet: fiery, headstrong, and a little exasperated with Romeo’s constant poetry. She really seems to drive the whole story. The Nurse is bawdy but loving. Luca Capulet is the one responsible for the ongoing rift between the families, while Sr Montague is just old and tired and has very little passion left in him. The poor friar has the best of intentions, but nothing turns out as he plans. Paris is a lascivious wretch; you can see why Juliet would rather die than be forced to marry him, even had there been no Romeo.

This version also had what I’ll call a surprise ending, though the author’s note explains that Shakespeare borrowed his source material from older writers and did not invent the story of Romeo and Juliet… his version just became the most popular. As I listened I kind of hoped there would be an alternate ending, since I wasn’t sure how much license he was taking. The ending I got still wasn’t the one I really wanted, but it fits with the characters, I think.

Also, I could listen to Richard Armitage read the phone book. What a voice!

Language: I think there was some but I can’t recall.

Violence: lots of murder and gore, though it could be more gratuitous than it is

Sexual content: present once (marital, between Romeo and Juliet on their wedding night) but quite a bit of vulgar innuendo