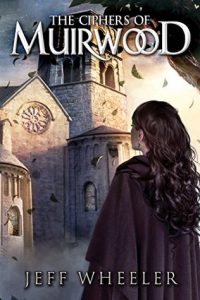 Still loving this series! Like all Wheeler’s series, it’s very episodic, but that serves to make it feel more like I’m actually in his world. As always, my review will have to contain spoilers–when stories as as episodic as this, I don’t know how else to describe them but by stating what happens.

Maia’s saga continues, still with shades of Cinderella. She lives permanently at an abbey where she studies to take the Maston test, and she’s assigned a companion named Suzenne, though I didn’t exactly follow the purpose of the companion other than to keep her from being too lonely. She’s otherwise shunned by the other learners in the abbey, presumably from envy. She longs for her husband Collier/King Gideon, whom she’s left behind, and who believes she betrayed him. She aids in Suzenne’s romance, and is forced to watch, heartsick, as she and Dodd enjoy what Maia never can with Collier. My favorite part of the story is when Gideon turns up at the abbey in disguise, and they have the opportunity to at least attempt to mend their differences.

Time passes, and the abbey is first visited by Maia’s evil stepmother and stepsisters (who vie for King Gideon’s affections). He makes a spectacle of choosing Maia over them before revealing their secret marriage. Maia’s father the king (of another realm), who first divorced her mother on shaky grounds and has now tired of her stepmother as well. When in power, the stepmother sentenced many of her enemies to beheading, but there are rumors that now that she is out of favor, she may suffer the same fate.

Maia’s father then descends upon the abbey too. It has been prophesied that Maia will open the apse veil (which seems to be the veil between the living and the dead) in order to protect the abbey, and she eventually does so, bringing back central characters from an earlier series in this universe, Maia’s own ancestors. In the process, Collier/Gideon, who had no interest in the Medium whatsoever, becomes a believer, and also declares that even though he never had any intention of loving Maia when he coerced her into marriage, he finds that he does anyway.

The stepmother meanwhile, with shades of Ann Boleyn, is sentenced to beheading after all. Despite how horribly she once treated Maia, Maia attempts to use what influence she has to save her. I do love how the messages of values like forgiveness and repentance lace through Wheeler’s stories.