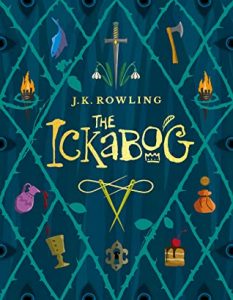 I’m so happy JK Rowling wrote something else in the children’s fantasy genre!

This reads like an allegory, and for the first 2/3 of the book I was nearly sure it was a morality tale about current political events. The Ickabog is (supposedly) a fictional creature from bedtime stories. But then political schemers decide that it would behoove them to convince the people that it is real–so that they can control the people by fear, and impose a tax that impoverishes a once prosperous nation. Those dissenters who bring forth evidence that the Ickabog does not exist are mocked, shunned, threatened, and murdered– and then their deaths are blamed on the Ickabog.

(At this point I had to stop and google when she wrote this. While it came out in 2020, I found an interview in which she said she wrote it 10 years ago, and for some reason sat on it until this year, when she finally published. She specifically stated that it is not meant to parallel anything happening today.)

The very end of the story takes a different turn. One of the primary rules of literature is (I think) that if the reader is set up to expect one thing for almost the entire story, you can’t just deliver what they will expect. You need to subvert their expectations, or they will consider the ending a let-down. While the ending is still predictable, particularly for those who enjoyed “Fantastic Creatures” and who are familiar with Hagrid’s fascination with such creatures in “Harry Potter,” it’s different than the setup for most of the story.

Many reviews I read said that this isn’t a children’s story, and I agree. The narrative voice is very young, but the subject matter is dark and grisly. I’d say it’s suitable for older kids than the narrative voice might suggest. Definitely entertaining, though: I finished it very quickly.

Violence: lots of murder and cruelty, though it could be more graphic than it is

Political content: questionable? I’m not sure I believe publication this year is total coincidence.