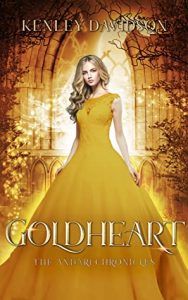 These are the best fairy tale retellings I think I’ve ever read. They are not cheesy (it itself a feat!), well written, and are so loosely based on the original tale that I never quite know what’s about to happen, even though I do know the story upon which it’s based.

For “Goldheart,” that’s especially true, as the retelling is *extremely* loose. The main character is Elaine, a peripheral character in the first book in the series, “Traitor’s Masque,” a loose retelling of Cinderella. Elaine is a very meek, non-confrontational painter who finds herself in a sudden and dire need of cash. So she accepts the strangest commission she’s ever had: to paint the wife of an absurdly successful financial investor, who lies on her deathbed. But she is not to paint her as she is; she must paint her as she was, in the investor’s memory. Only he’s so unapproachable that she does not have access to his memories either. He, presumably, is the Rumplestiltskin character, while she is given the impossible task (spinning straw into gold) and locking her away until she completes it. If she does not do so, she will lose everything, but if she does, he will cancel all her debts, as it turns out, he holds the notes for them. The only “gold” in the story is that Elaine manages, with help, to procure a golden dress that Serena, his wife, wore in her heyday. She paints the portrait wearing the dress.

Meanwhile, the investor (Torbert Melling) has a grown albino son named Blaise whom he’s locked away in his attic for shame. Blaise is fabulously wealthy but of course, terribly sad and neglected. Blaise has a friend named Will, who, for reasons of his own, has also become Blaise’s servant of sorts. These two become love interests for Elaine, kind of, though very early on, only one of them emerges as a real contender.

It’s an entertaining story from start to finish. I’m glad I remembered this series, as I will definitely be reading on!