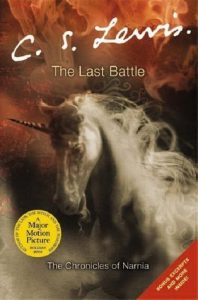 The whole way through this series this time through, I’ve been trying to decide which book is my favorite. I think it might have to be this one.

Only three of the seven books are overt biblical allegories. The Magician’s Nephew is an allegory of the creation story of Genesis, The Lion, The Witch, and the Wardrobe is an allegory of the passion and resurrection of Jesus, and this one is an allegory of the apocalypse, as told in Revelation. Once again, I’m absolutely awed by Lewis’s astute and subtle characterization. The story opens with a donkey and a monkey; the donkey is sweet and innocent, but simple, while the monkey is shrewd and manipulative. The monkey, Shift, manages to guilt the donkey, Puzzle, into dressing up like Aslan (the antichrist), at a time when Aslan has not visited Narnia in so long that the animals begin to wonder if he is just a myth. Shift thinks that this will mean all Narnia will just give him whatever he wants. But quickly Shift ends up over his head, as the evil merchants of Calormen use the opportunity to enslave the people using their devotion to Aslan. The poor Narnians are heartbroken that Aslan, as they think, is turning out to be “not Aslan at all,” but evil–and yet, as they all say to themselves, “he’s not a tame lion!” and use this to explain how good might become evil, and evil, good. The Calormen play on this, telling the Narnians that their demon-god Tash and Aslan are one and the same, even calling him Tashlan (though most of them don’t believe there is such a thing as Tash). In this way, they overthrow the last king of Narnia.

Meanwhile, deposed King Tirian cries out for help from the children from beyond their world, as in the stories of old. Jill and Eustace come to his aid, and uncover the plot, revealing that the false Aslan was just a donkey in a lion’s skin. They expect this will mean all the Narnians will throw off the oppression and come to their aid–but once they find out there was a false Aslan, it makes them also disbelieve in the real one. Anarchy ensues, and then the last battle begins.

The battle ends about 2/3 through the book though. The rest is a much more in-depth exploration of Lewis’s version of heaven, of which we only got a taste in The Silver Chair. (Spoiler alert): all the children from the previous stories, many of whom are grown up now, were in the same carriage accident in England. At the same moment that Narnia dissolves in fire and ice, they all die and enter Aslan’s country. Normally we think of this as a tragedy, but here it’s the most wonderful news: they don’t have to leave again this time! They can stay forever! They grieve at first for their lost Narnia, but then find that Aslan’s country contains within it the “real” versions of all of the lost places, which were only types and shadows of the real thing. Narnia is all there, only better than they remember it. Their home in England is there too. All the heroes of the previous six books return in a wonderful reunion. There’s adventure without conflict, perfectly harmonious relationships, and Aslan there all the time, forever. I was crying for joy by the end. Can’t think of an ending that tops that from any series, ever.