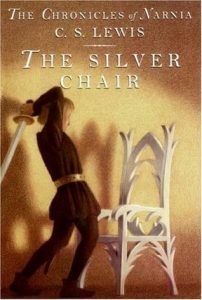 This was probably the book I remembered least of the Chronicles of Narnia, but man, every one of these books is just so amazing, for the same three reasons. First, it’s not just the creativity, but the whimsy that makes Narnia a world I long to escape into. Second, C.S. Lewis is incredibly astute about human nature. He captures psychological nuances of characters and motivations that are just so clever and perfect. Third and most of all: Aslan. My favorite scenes are always the ones he’s in. I can’t really think of any other fictional book that dares to make Jesus such an overt character within the story. If God comes up at all, most just talk about “religion”and make it sound stuffy and restrictive, or else (in Christian fiction) they’re usually heavy-handed and overtly cheesy. But you can’t help but fall in love with Aslan. It’s the only sane response. The fact that Lewis manages to capture this in a character portrayed as a talking lion is a testament to his incredible skill.

In The Silver Chair, Eustace (who had a dramatic character arc in Voyage of the Dawn Treader) and a new character, Jill Pole, get sucked into Narnia to help rescue Prince Rillian from the Emerald witch. Rillian is the son of King Caspian, whom Eustace knew as a young man and who is now elderly and about to die, since time runs differently in Narnia. Aslan comes into the story early, and gives Jill several signs that she needs to follow in order to find him… but then none of the signs look the way she expects them to look. Rillian is held hostage both underground and also under a spell that seizes him 23 hrs per day, and in the 24th hour when he briefly regains his sanity, she straps him to a silver chair and hides him away so no one can hear him raving the truth.

Of course, after many missteps and misadventures, Jill and Eustace succeed, with the help of a cartoonishly pessimistic creature called a marshwiggle. But my favorite part of the story comes after this, at the end. (Spoiler alert:) King Caspian only briefly sees his son, and then dies. All of Narnia mourns. But then, he’s carried to Aslan’s country, with Jill and Eustace. I cannot think of any other stories in which we get to see death from the perspective of heaven. There, it’s not sad at all–it’s so achingly wonderful, it made me tear up with joy.

If you haven’t read this series, you really need to.