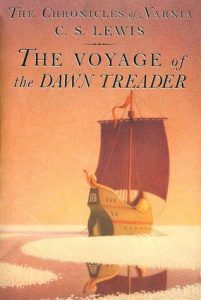 Delightful, as all the others are! This one I feel is more a pure adventure story–that is to say, seeking adventure for adventure’s sake, rather than for some other purpose. In that sense there isn’t so much a plot. King Caspian, whom the Pevensie children met in the book “Prince Caspian,” is aboard the Narnian Dawn Treader, bound for the end of their world. Lucy, Edmund, and their irritable cousin Eustace all get into Narnia through a picture in Eustace’s house, and join in on their exploration of far off islands: unknown because in Caspian’s uncle’s time, when he was the usurper to the throne, he banned all sea voyages. At the same time, he sent off seven lords to the outermost parts of the world, none of whom ever returned–so the purpose of the voyage is to find the seven lords.

The story definitely reminds me of the Odyssey, but also of certain aspects of The Fellowship of the Ring (particularly Tom Bombadil and his daughter, whom I think have their analogues in the fallen star and his daughter). There are mermaids and dragons, books of magic spells, and little morality lessons for most of the characters, all presided over by Aslan, who lurks in the background for most of the story until the very end. I just love how he tells Lucy at the end that she must get to know him in our world, and here, “I am known by another name.”

I’ll never get tired of re-listening to this series!