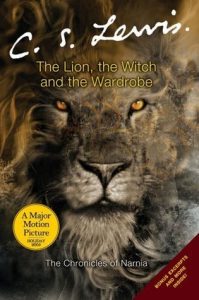 My mom used to read to me when I was little. I’d curl up beside her while I embroidered pictures and patterns on a tattered old pair of my jeans… and the Chronicles of Narnia stands out foremost in my mind when I think of these memories.

I grew up in church, so I knew about Jesus. But I really felt like I was introduced to him in the character of Aslan, so obviously a type of Christ. This is primarily a parable of the passion and resurrection of Jesus, though there are a lot of fun whimsical details that make it identifiable for kids, and things get tied up in a nice neat little bow far more than they do in the gospels themselves. But that is to be expected, if the gospels are true–art mimics life, but life is often not nearly so poetic as art. I love how Lewis paints the idea of Aslan’s willing sacrifice in Edmund’s place as “deep magic from the dawn of time,” which the Witch (a type of Satan) knows, and gloats over, thinking she has ultimately won. But what she doesn’t know is that there is a “deeper magic from before the dawn of time”: that if an innocent dies willingly in place of the guilty, death itself will work backwards. Aslan is resurrected, the kids fight against the White Witch and her minions, and the kids sit on four thrones in Cair Paravel as prophesied in Narnia’s Golden Age. Can’t get more victorious than that! And it’s so much more enduring than just a regular story, at least the essential parts of it are.

I’ve reread the Chronicles of Narnia many times in my life, and I’m sure will reread them many more to come.