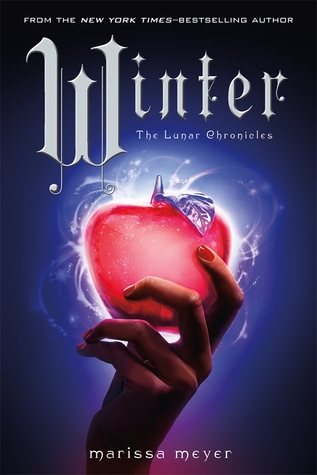 I loved the entire series, and raced through it the second time. The action is non-stop!

On the plus side: like any good fairy tale, this one ends with a “happily ever after.” And yet it doesn’t seem too perfect–there are still casualties, and even the main characters don’t all escape unscathed. But everyone ends up with his or her pair, the good guys win, and justice is served for all. I also love Winter’s character–she’s fascinating to me as an author, because somehow Meyer managed to make her lovable, and crazy at the same time. That’s very hard to do in a main character! I think she only managed it because by this point, there are three other main characters (or really six others: three other couples) to dilute Winter’s insanity.

As much as I enjoyed the whole thing, I did think this story was a lot longer than it needed to be, though. There were plenty of moments, but one in particular, where I thought she could have wrapped it up and cut out about half the book. I also felt like Cinder as a revolutionary was a bit of a let-down–she makes stirring emotional speeches (without actually saying much of anything), but I have a hard time buying the idea that that alone is enough to induce hoards of people who have been slaves for generations to suddenly rally behind her and sacrifice everything. Then again, I don’t really know how she could have done it better, so I can’t fault her too much for that. I also felt like the actual climax was a bit of a let-down, partly because I didn’t buy the reason for Levana’s sudden weakness.

But! I always love happy endings!