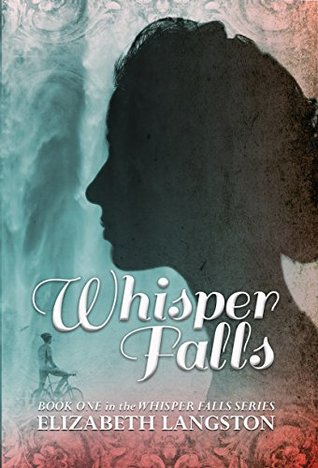 I was surprised by how much I liked this one! I can’t remember how I got the book — I think it was a freebie. But I got sucked in pretty quickly. This is billed as a time travel romance, and it’s sort of that… I guess it fits that category better than any other I can think of. But it really feels more like an adventure novel to me.

Susanna is a 17-year old indentured servant in 1796. Mark is a 17-year old high school student and competitive biker in 2016. The only part that requires suspension of disbelief is how they communicate with one another: the water of Whisper Falls acts as a portal between their worlds, and they each stumble across it on accident. Over time, Mark learns that Susanna is brutally treated by her master, though she loves his children. Since he’s from her future, he learns her fate, the fate of her town and of those she loves–and armed with this information, he travels through time to save her.

The chapters alternate between Susanna and Mark, and both characters are equally believable and compelling, I thought. I really root for both of them. The romance is there, but minimal, and it therefore manages to avoid becoming cheesy. I was a bit surprised by the ending, even though the story setup didn’t really allow for any other possible end… I still somehow didn’t think it would happen that way. But I’m glad it did. Definitely a fun, different read!