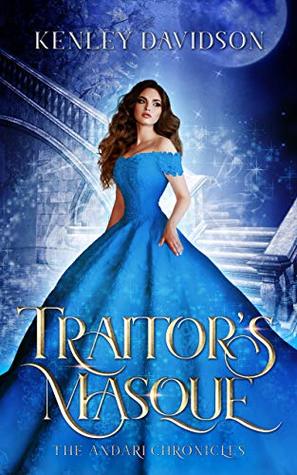 What a delightful surprise this was! Definitely more than just a Cinderella retelling, though the bare bones of the fairy tale are there. Traitor’s Masque has a lot more intrigue and suspense than Cinderella ever did. You never would think it from the cover, though–it made me think I likely would find the story unbearably cheesy. I’m glad this was one case where I did not judge the book by its cover.

Trystan still has a wicked stepmother and two spoiled stepsisters, and her father did pass away. But the prince, whom she meets riding in the woods, is not just your dashing Prince Charming. In fact, he’s the younger and less attractive prince, nevertheless in line for the throne because his father favors him over his playboy older brother. (I found it interesting that the prince was not described as devastatingly handsome.) The ball is still the prince’s attempts to meet a wife from among the people, but Trystan is sent there for another reason entirely: a lady in the court invites her to attend in order to perform some act of intrigue that Trystan doesn’t understand, in exchange for her freedom from her stepmother. She agrees, not knowing that Donovan, her riding companion, is the prince in question until she gets there. She can observe him without being recognized, though, because it’s a masque. Little by little, Trystan realizes she’s empowered a coup to overthrow Prince Ramsey (as Donovan turns out to be), and she’s horrified at what she’s done. But once she puts it together, can she make it right?

There were a couple of moments in the story that I thought were very ill-motivated: Trystan needs to be at this place and meet this person, so the author contrives a flimsy reason for her to go, and a couple other things like that. But these were really my only issue with the story. Otherwise it’s engaging from start to finish, a refreshing twist on an old classic. Trystan and Prince Ramsey are both very easy to root for.