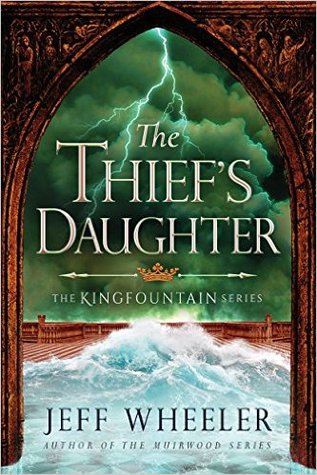 Like the first in the series, this one started off a bit too slow, I thought. But once it got going, I was again hooked.

Set in a high fantasy world, this series is nevertheless a lot more engaging to me than most high fantasy because the characterization is so good. Owen, the little boy from “The Queen’s Poisoner,” is now grown up at 17, as is his best friend, Lady Elyzabeth Victoria Mortimer (Evie for short). They are in love with each other, but he is a Duke and she a Lady of King Severn’s realm. Therefore, their duty to the king trumps their own personal desires–and the king decides to use Evie to form a marriage alliance with a neighboring, and threatening, kingdom. Owen is forced to go along, incognito, and pose as one of Evie’s bodyguards. His real purpose there is to use his fountain magic to determine whether or not the pretender to Severn’s throne, Aeric, is who he claims to be: the rightful heir.

Meanwhile, the poisoner from book 1 passed away, and now there is a new poisoner of the realm, Etayne (to whom the title refers). She, too, goes along incognito on their journey, and Owen discovers that she is also fountain blessed with a gift different from his own: Etayne possesses the gift of disguise. She can make herself appear to be anyone she chooses. Owen helps to train her in her gifting, and the two of them become close friends. Etayne develops deeper feelings for Owen, but Owen is too busy being jealous of King Iago Luellen, Evie’s intended.

Aeric turns out to be who he claims, but through his fountain magic (the Fountain will sometimes tell him things to come, usually in a cryptic single sentence), Owen learns that things are still not quite what they seem. There is a prophecy that an ancestor of their realm, known as the Dreadful Dead Man, will return and reclaim the throne. This insight changes Owen’s counsel to King Severn, and the outcome of Aeric’s bid for the throne.

The story ends sad, I’d say, and it seems rather final–but it’s book 2 of a four book series, so I’m curious to read on until the true ending. I also love the fact that the series is completely clean! That is so rare.

My rating: ****1/2
Sexual content: none
Political content: none (fantasy politics only)
Language: none
Violence: minor (there’s war but it’s not gratuitous)